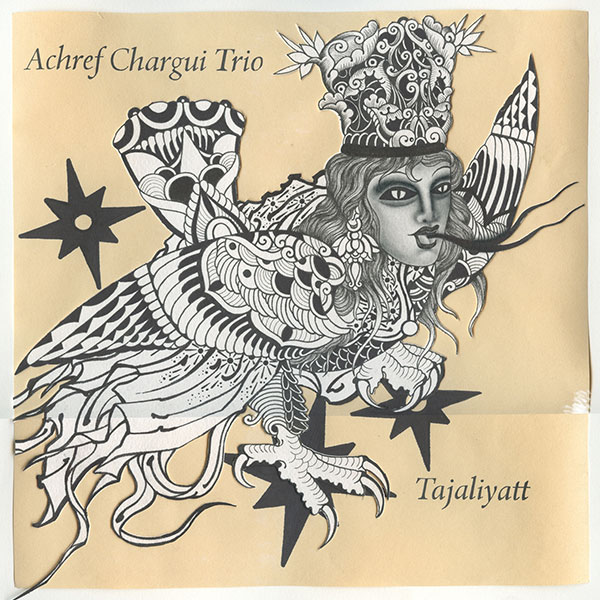 Tajaliyatt is the second album from the ambitious Achref Chargui Trio. Composed of the aforementioned Chargui, a Tunisian oud player, along with drummer Jacopo Adreini and bassist Piero Spitilli, the trio builds on the successes of its first record, Exagéré (2014), with an exciting collection of compositions that scour the Mediterranean and beyond in a quest for new sounds.

The core of the album is built around the idea of recording the compositions in complete takes, capturing the energy of three musicians listening closely to one another while navigating the twists of the often-complex songs. The opening track, “Relámpago Negro” (Black lightning), lays out the blueprint, opening with an ear-catching riff that showcases each contributor’s technical abilities before diving into the eccentricities of the main melody. Though the song uses repetitions of key melodies and motifs, the greatest thrills come from the sections that feel left open to the interpretation of the moment, resulting in musical events that have a genuine sense of irreproducibility about them.

As the primary melodic instrument in the group, Chargui’s oud sets the tonality of each piece with his note choice and glides from the structured semitones of Arab music into sonorous lines more indicative of the European tradition with uncommon poise. The closing track on the vinyl edition of the album, “Lella Manoubyya,” is probably the best example of this cross-cultural mixing and goes even further with textural use of electronic effects toward the end, something rarely employed effectively on the oud. Whatever stylistic mode Chargui is playing in, his lines are crisp, playful, and peppered with the right- and left-hand flourishes that make the oud such an interesting instrument from a technical perspective.

Though Chargui lends the band his name, his presence never overwhelms the unique balance of the ensemble as a whole. Adreini is a formidable presence on the drums and brings a voice as unique as any horn player might to the album. On tracks like “Catacumbia” and “Vulcano,” his idiosyncratic drumming is brought to the forefront of the compositions while Chargui and Spitilli arrive at just the right moments to lock in with his infectious, often odd-metered grooves that share as much in common with rock as they do jazz. The album’s high point is a hard-charging interpretation of the Arab music standard “Rakeb el Hamra,” where Adreini channels the sound of a whole orchestra of hand-drummers on his otherwise sparse drum kit.

Spitilli adds new dimensions to his contribution to the trio, ranging from traditional upright bass tones to electric sounds better designed to cut through the sometimes-chaotic arrangements. On the song “Kandinsky,” he blends breathy, bowed sounds into the tonally fluid composition, evoking a cinematic quality. He and Adreini come together throughout the album to generate muscular rhythms that are the perfect counterpoint to Chargui’s wide-ranging oud lines. Spitilli’s contribution is not limited to outlining grooves as he regularly moves forward in the composition to add harmonic depth with perfectly timed countermelodies delivered in a lyrical voice quite his own.

Perhaps the most tantalizing aspect of Tajaliyatt is the force with which it defies the expectation of genre. In drawing from elements of jazz, Arab music, Spanish flamenco, post-rock, and various other genres, the trio brews up a heady blend that cannot be described by listing its constituent components. If a genre called world music can exist apart from the music of various regions brought together to create it, surely the Achref Chargui Trio’s Tajaliyatt would be included among its more vital triumphs.