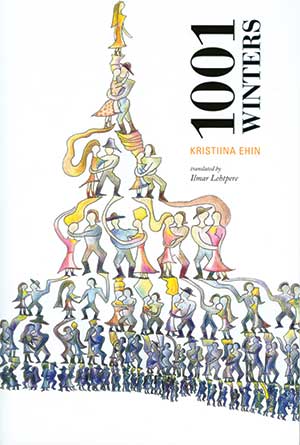 Kristiina Ehin’s voluminous bilingual (the original Estonian and English translation) collection of one hundred poems is permeated with the feeling of a need for closeness with the Other, a fellow being, and an interior dialogue with the invisible companion. The title evokes associations with Scheherazade—the poems can be read as fascinating little tales narrated in the long, dark winters, the time that stories were usually told on country homesteads. References to the richness of Estonia’s nature and the specific customs and traditions—as well as tragic memories—of the country’s rural past abound, leaving impressions of the recent surface thin.

Befitting the author’s education in Estonian and comparative folklore, numerous mythical and magic motifs suggest an ancient lyrical epic heritage along with intertextual references to the ballads of earlier poets (“Woman of Gold,” “Swan Bone City,” “My Sisters the Ravens,” “Cows Come from the Sea,” the figures of sea mother and sea maidens). The sensual intimacy that shapes the poems reflects the speaker’s responsiveness to the modeling influence of her native surroundings, her time, and the male presences in her life: “fidelity—rough as a man’s cheek / raw meat that draws you close / a trail that remains / a trail that can’t be abandoned.” With the intensifying effect of a folk performer, the author employs alliteration, invocation of primeval phenomena, and repetition of phrases and stanzas (“Carrion-green”). There are rare instances of rhymes among the free verse in the original, as in “Püssimees seisab õues” (The gunman stands in the yard), which are not transmitted in the translation.

In the vein of the long line of Estonian women poets, Ehin’s poems delineate a background of ancestral voices, enrobed in the shades of everlasting nature, upon which her own sincerity weaves new patterns. Like one of her predecessors in Estonian verse, Anna Haava (1864–1957), the author recalls a female zither player, playing softly—not to vex the loved one but with a resonance of spiritual power. The collection ends with a poignant “Lament for My Father,” the recently departed, renowned surrealist poet Andres Ehin (1940–2011): “honestly I know of no one else / so dependent on fresh air . . . all of it is for you now.”