The Master of Insomnia: Selected Poems by Boris A. Novak 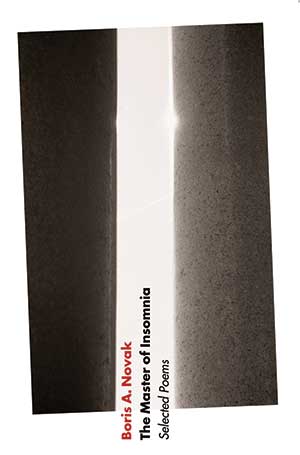 One key to Boris A. Novak’s poetic development over four decades can be found in the closing lines of “Discovering the Everyday”: “I am learning to speak specifically: / not of birds, but of swallows and robins, / not of flowers, but carnations and roses.”

In his poems from the 1970s, nouns are most often general, with verbs focusing on process, interactions, especially in images of weaving, and reversals and complements, so that “Truth is always being born at the edge,” “life is translated into still life” (though in an untranslatable pun, it remains “life”) and “in a poem,” the poet “is someone who’s always missing.”

These generalizations apply to Novak’s poems until the late 1990s. The poems from The Master of Insomnia (1995), written in response to the Bosnian atrocities, are unusual for a political and cultural activist like Novak in that they deal not with specific incidents and people but with the poet’s emotional response to the general conditions.

The contrast between general and concrete does not imply the superiority of either. The earliest poems, very short, resemble truncated haiku and invite contemplation rather than analysis. A bit later, Novak works in tightly structured forms like the sonnet cycle in which the last line of each poem becomes the first of the next—and the last poem is composed of a reprise of first and last lines. “The Tower” interweaves lines less regularly and more intricately as a way of reflecting the futile and self-destructive cycle of attempts to escape not only the earth but time and change.

Later poems are less formally structured and more readily accessible, certainly to people facing the task of “Tidying up after the Dead” and facing their own mortality. Novak does look back with a certain regret to “The Poet I Was” when, looking at everyday things, he sees “the glowing sign of the miraculous” without needing to write actual poems. Now “I see only things. . . . But the poet, / the poet I was then, when I floated above the earth.” The collection ends with his fear that while he will never find the truth, “I must give a final account of my research.”

Novak’s poems can stand on their own, but those who need information about the history of Slovenian language and literature as well as the political and cultural worlds in which Novak writes should turn to Aleš Debeljak’s useful introduction. Ultimately, Novak’s selection is far richer than a brief review can indicate, but perhaps the Dalkey Archive’s Slovenian Literature Series will bring to Novak and other writers the wider attention they deserve.