The Lowland by Jhumpa Lahiri 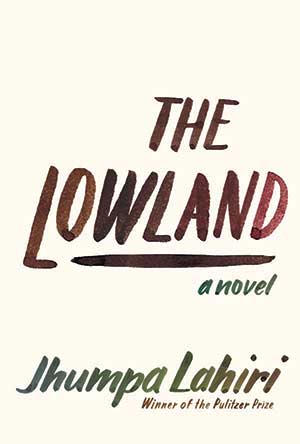 In this exquisite novel, Jhumpa Lahiri revisits some of her major themes—dislocation, assimilation, family connection, and the difficulties of love—but in this instance she develops her characters and circumstances in greater depth than ever before. It’s no secret that Lahiri’s prose can be lapidary—she has proven that in the story collections Interpreter of Maladies (see WLT, Spring 2000, 365) and Unaccustomed Earth (see WLT, Jan. 2009, 68)—but here she also sustains a complicated narrative spanning three generations with a deft and yet profound touch.

There are some slow moments, to be sure, especially in the beginning when she has to provide the historical and political background of the Indian Naxalite movement, which in the mid–1960s embroils one of the two brothers central to this tale. But the narrative takes off once we are privy to the scenes of Indian daily life in the home of the brothers, Subhash and Udayan, who are as close as twins yet vastly different temperamentally.

From the descriptions of the lowland—the marshy area near their home in Calcutta and the scene of a crucial moment in the novel—to the scenes across the Atlantic in Rhode Island, Lahiri masterfully delineates place and mood. The bulk of the novel takes place in America, and much of it in academia, environments she captures skillfully, contrasting the crush of humanity in Calcutta with the almost barren seascapes of Rhode Island.

But more than anything this is a novel about individual human beings trying to forge happiness out of the crucible of obligation and duty. Subhash marries Udayan’s very young widow, Gauri, and raises a child fathered by his brother. Therein may be enough complication, but the novel is made even more wrenching by Gauri’s chilly personality and withdrawal from love and even, in some ways, from life.

Lahiri takes us into Indian life and custom just enough to have us viscerally feel the clash of cultures that Subhash encounters when he relocates to America. She also deftly limns the gradual assumption of American values that makes him, in the end, very much an American. Juggling ideas and details, abstracts and concretes, from Hindu philosophy to Descartes, Lahiri’s wide-ranging reference points enrich this novel and underscore the university ambience in which much of it is set.

It is true that the reader never warms to Gauri, a distant, cold, and academic character, but the reader’s heart is warmed by Subhash and his overwhelming love for the character who brings meaning to his life: Bela, the daughter he shares with a ghost. In the end, the reader is rooting wholeheartedly for each of them to define and then find happiness.