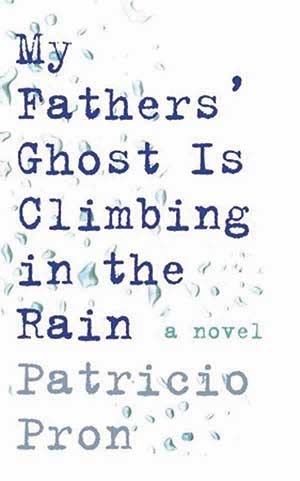 To its great credit, this extremely competent novel has prompted uncritical vacuity and petty comments in some American book reviews. The novel’s narrator, never Patricio Pron of course, revisits a historical past (Argentina’s dictatorship years) about which he knew little directly and, like many of his cohort, avoids the past as prologue. Consequently, the novel returns to profound matters with a subtle apolitical stance, without the national angst or the trite metafictional musings that are still considered de rigueur for Argentine narrative. That revisionist approach is Pron’s greatest blessing.

Political inclinations, My Father’s Ghost avers, are not rooted in rational choices or quantifiable personal history, a common perspective for Pron’s generation. Ubiquitous in the Spanish-language press, a translator, and trained as an academic, Pron is a masterly short-story writer; and this novel’s fragmentary structure (three sections, composed respectively of fifty-two, seventy-two, and forty-one episodes) shows how he amplifies “simple” forms to great use. Those forms include factoids and documents that testimonial or loosely historical novels of the denunciatory Latin American 1980s put to academic misuse.

In that regard it is plainly naïve to resurrect Borges as a paradigm, or to compare Southern Cone travails to the Holocaust. Pron, certainly aware of those palimpsests, is wiser. What his novel narrates is a young writer’s return to the womb, a doubly journalistic quest for the “real” source and meaning of one of his moribund father’s obsessions, as revealed in the realia he finds. As the intricacies dissolve, more than deciphering sinister paternal memories, the narrator wonders about his own role in the legacy he encounters.

But those are paper tigers, bones for bad readers (the referent city of Rosario becomes *osario, or charnel) because the epigraphs for every large section—by Kerouac, César Aira (the closest master to Pron’s contemporaries), and an earlier populist, Perón—are more revealing of Pron’s view of how nurturing styles may inform generational views of survival, or literature. His established peer, Alejandro Zambra, has written authoritatively about “Literature of the Parents,” and Pron and many others point to how close relatives have actually encouraged a different identification with authority. At one point, those born in Argentina in 1975 (like the author) are called the “consolation” prize of those who failed politically. In addition, Pron establishes the proper distance and intensity with his topic, checkmating purportedly postmodern subterfuges.

But more than that, novels like Pron’s warn that converting a real story into a fiction carries with it the possibility of becoming a dead end. That is how the embedded story/case about Alberto José Burdisso and his disappearance should be contextualized. By having a temporal arch that covers 1977 to 1988, Pron is able to put into feasible perspective the deconstruction of a horrible story. (Pron is an excellent reader of detective nonfiction; if one wished to force national predecessors on his prose, the obvious comparison is to Rodolfo Walsh.) Finally, Lethem makes choices and compromises that do not take the rhetorical punch out of the original, but at times the Spanish shorthand for the “illegible” reports in some episodes comes across awkwardly. This auspicious English debut for Pron makes one look forward to future translations of his works.