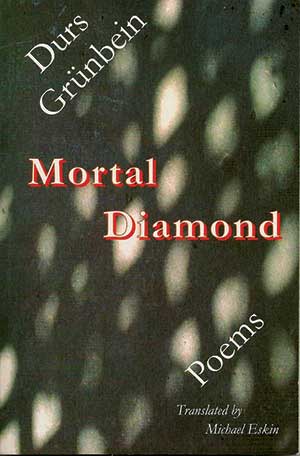 Durs Grünbein’s philosophical poetics in Mortal Diamond come to us in English from Upper West Side Philosophers, a publisher that proclaims to focus on “philosophical thinking steeped in lived life.” This small book of dense poems is framed as a “spiritual journey through the labyrinthine cosmos of the human soul,” regarding the “paradoxes of creatureliness.” Through Grünbein’s treatise on what it means to be alive as related to other living organisms, the divine, and past philosophers, he questions what he can really proclaim to be true, and what part of that truth he can question.

Sandwiched between the translator’s preface and notes are thirty poems that vary between one and six pages of small type (a book you can carry along in a purse or lunch bag), which on any given page will challenge the intellect as much as the aesthetic of verse. Divided into five sections, tropes of extended metaphor, allusions to mythology, and internal rhyme thread the individual parts into one work. Many of the poems center around theology and various musings on God and his existence, including those of Descartes, Pascal, Augustine, Malebranche, and Dante, often through dialogue with these thinkers of the past.

Alongside a tradition of religion, Grünbein follows the histories of geometry, biology, and astrology. He focuses particularly on Pascal and his perceptions of God: “like a pulsar, he is light years away from us, yet, with the regularity of a pulse, he sends palpable, hot and cold waves through the human heart” (“The Indian of Spirit: Bagatelles on the Life of the Philosopher Pascal”). These poems claim that we find God in the scientific explanations of what we can see and sense as humans, an interesting take on bringing heaven to earth.

Though addressing the cosmic divine, Grünbein focuses in on the microscopic—actually seeing things through a microscope—details of tiny creatures and the technical language of science and mathematics. He relates philosophy to looking at animals and landscapes: “The land adorns itself with cones of white: the trees / That with his wintry hand the mighty arrangeur / Refined / . . . A folio of sheets of white, which he alone inscribes / . . . A brand new dawn of pure geometry / . . . snow helps to understand perception” (“The Snows of Today,” the first canto from Grünbein’s novel in verse, On Snow or Descartes in Germany). The speakers of these poems will not allow the philosophers they are addressing, such as Descartes, to stray too far from earth, too far from the dust and mites we encounter every day.

Durs Grünbein has conspired with the sea floor of humanity and the stars of the divine (“Illumined Night”) to find a center of what poetry is: earthly and spiritual.