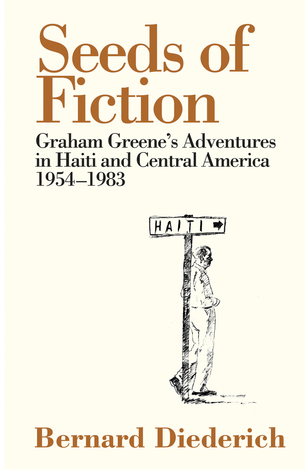 In a Time magazine movie review of Graham Greene’s The Comedians, its critic commented that the screenplay had “everything but economy . . . a story that might have been twice as good at half the length.” This might also apply to Seeds of Fiction.

Bernard Diederich, a journalist born in New Zealand, founded an English-language newspaper in Haiti, became a resident correspondent for various US and English papers, was arrested by Papa Doc’s Tonton Macoutes, expelled from the country, and met and traveled with Greene throughout Haiti and Central America.

Diederich admits to being in awe of his subject, describing his subject as a “warm, self-deprecating man, whose boyish exuberance followed him into old age” and for whom “there was no doubting the sincerity of his concern about the human condition.” Greene never lost his eagerness for adventure, which Diederich vividly describes in his account of their travels in Haiti, the Dominican Republic, and Panama.

Greene’s books usually had appropriate settings: The Power and the Glory (Mexico), The Quiet American (Vietnam), The Heart of the Matter (West Africa), A Burnt-out Case (Central Africa), Our Man in Havana (Cuba), and The Comedians, set in Papa Doc’s Haiti. His writings reflect his latent anti-Americanism (although he forgives English imperialism), which Diederich apologetically excuses as “sympathy for the underdog.” Diederich concentrates on Greene’s Haiti years, reflecting on the concentrated misery and poverty of the people. Greene himself did not aspire to luxurious living per se, although Diederich admits that Graham enjoyed “good food and wine, crisp vodka martinis, and smooth Scotch whisky.”

In contrast to previous biographies of Greene depicting his darker side, Diederich attempts to show his humanity: even in his old age, Greene answered letters—an average of 180 per month. And after an exhausting day traveling in the Haiti countryside, Greene quips: “There must be a brothel where we at least can get a cold drink.”

Seeds of Fiction provides an intimate portrayal of one of the great novelists of the twentieth century as well as a fascinating glimpse into a heretofore-obscure period of his life.