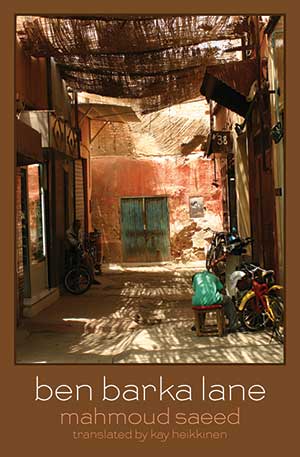 Best known as the author of Saddam City (2003), a harrowing, partly autobiographical account of life in Saddam Hussein’s police state, Mahmoud Saeed is a distinguished Iraqi novelist and short-story writer with more than twenty volumes to his credit (see WLT, Nov. 2012, 30–41). But Ben Barka Lane is not set in Iraq; and the novel is not among Saeed’s latest works but rather dates from 1970, when he was in his early thirties. Banned in Iraq, it was published in Cairo in 1987, then in Amman and Beirut in the 1990s. This is the novel’s first appearance in English.

It is a young man’s book, full of the joy of life, the allurements and satisfactions of the physical world, women’s bodies, grilled lamb and alcoholic exaltation, even the delight of walking down a street in the evening “by way of the casino lined by tall palms, by huge trees and by fragrant blossoms . . . in and of itself an incomparable pleasure.” It depicts loneliness, too, and the agonies and jealousies of unrequited love.

Sharqi (“the Easterner”), its narrator, a political refugee from Iraq living in Mohammadiya, Morocco, makes a living teaching Arabic. Early in the novel he meets Habib, a former comrade of the revolutionary Ben Barka, now effectively under house arrest. This is 1965, and King Hassan II is clamping down on his opponents. The friendship between Sharqi and Habib is complicated when the former falls in love with beautiful and willful Ruqayya, who in turn falls for Habib. But Habib claims to “love the people,” and Sharqi says his friend cares only for his “clean reputation, which embodies the reputation of the popular movement.”

Certainly the Augean stable of Hassan’s Morocco could do with a good cleansing. Away from the beaches and the booze, starving children and their parents live in shanties made of tin sheets, and tomato-pickers toil in the sun, afraid of the guard’s whip.

Perhaps too much of this early work consists of conversation, occasionally rendered here in “translationese” (“Your sharp questions set up roadblocks for me, and I want peace”). Still, Ben Barka Lane provides insights into the Morocco of the 1960s and Saeed’s early promise as a novelist.