The Other Side of the Table by Madhumita Mukherjee 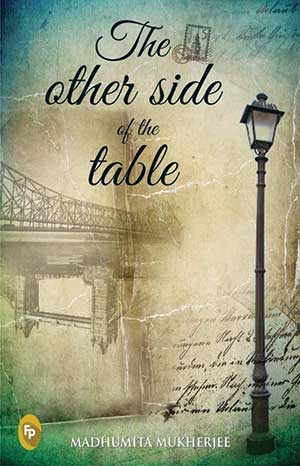 It’s not very often a book locates itself in the 1990s of both India and England. This period is a particularly interesting one for India, yet it is often sidelined for narratives of a more exciting, postmillennial “new India.” Madhumita Mukherjee’s novel is also interesting in its form; written completely in the epistolary, this novel charts the lives of two medics over a decade where one enters the world of surgery as the other leaves, their movements almost perfectly synchronized by fate. The letter writing begins in 1990 and ends nearly ten years later with the final letter in August 1999. As the millennium signals a move into the new, leaving the 1990s behind, the novel ends, too, with a conclusion of sorts. Open to the known, the unknown, and with ten years of letters behind Abhi and Uma, the novel brings together an (un)expected union.

The epistolary form is not one easily mastered. Here, we learn about the characters slowly, and at times they appear to have little depth; the letters simply communicating events, proceedings, and life’s tribulations. The novel picks up as we learn more about the relationship between the two characters, and with much of the background filled in, we begin to connect with both Abhi in London and Uma in Calcutta. The depiction of Abhi is particularly insightful. As a nonresident Indian living in the UK, Mukherjee is careful in designing his surroundings, friends, and career, and we feel real empathy for him as he faces moments of loneliness and despair in the latter part of the novel. Uma, on the other hand, faces her own moments of loneliness in Calcutta, but her experiences are very different from what Abhi, ten years her senior, is going through. She survives, despite the problems she faces, while all the time in contact with Abhi, who looks on patiently as she gets married, gets pregnant, and fights for a career in surgery.

Mukherjee writes her medics’ experiences with ease when it comes to their professional lives. Her attention to detail, her knowledge of the subject, and the experience of choosing medicine as a career all shine in this novel. She strikes a balance between the medical and the lay, resulting in a novel that will be of interest to those both inside and outside of the medical field.

For a debut novel, The Other Side of the Table is a confident step into the world of (Indian) fiction in English. It leaves, however, room for growth and development, in characterization in particular, something we hope to see in Mukherjee’s subsequent writings.