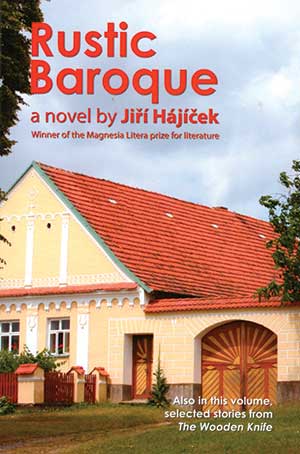 Jiří Hájíček is a Czech author, born in České Budějovice, southern Bohemia, where he spent his formative years in the rural countryside. He is the author of three short-story collections and four novels. His most successful novel, Selský baroko, was published in 2005 and was awarded the Magnesia Litera prize for Czech literature. After several translations in different European languages, this is the first translation into English.

The story unfolds in the present but often deals with the past after the communist takeover in Czechoslovakia and the forced collectivization of agriculture in the early 1950s. The land and property of somewhat bigger farmers was expropriated, and those who tried to resist paid dearly. Farms owned by the same families for centuries were taken away.

The main character of the novel is Pavel Straňanský, a professional genealogist. He makes his living by compiling family trees and digging in the archives, sometimes going back to Austrian-Hungarian times. His work entails a lot of travel in the small villages of the beautiful south Bohemian countryside, where some houses are built in the local, rustic baroque style. Things start slowly and are colored by the typical sarcastic but good-tempered Czech humor. The tension mounts when a client wants to dig up dirt on a political opponent and hires Pavel as one of the best in the archive business, promising a large sum of money.

Here, the characters are forced to reflect on how to deal with the totalitarian heritage: Should they forgive or seek revenge for past humiliations? Who will get restitution for a nationalized property or get rejected? Should Pavel fulfill his contract after he puts his hands on the secret diary of the Tomašice village and discovers a denunciation letter? The pace hastens to a surprise ending, a romance with an amateur genealogist complicates things, and the reader is left with no easy answers to these questions.

The translation by Gale A. Kirking, who lives in the Czech Republic, is excellent, with strategically placed annotations to help non-Czech readers with subtle details of the local culture and language, and even a short Czech pronunciation guide.