Report from the Interior by Paul Auster 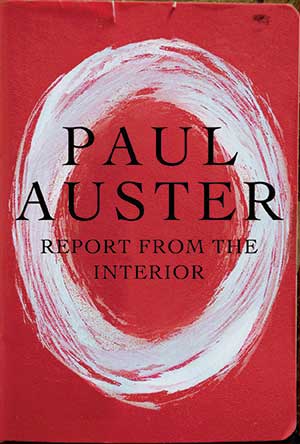 His success as a novelist notwithstanding, autobiographical writing has been at the forefront of Paul Auster’s work from the time of his debut, The Invention of Solitude (1982). In the case of this latest offering, the only thing one might find surprising, then, is that it’s published so soon after last year’s excellent Winter Journal. Indeed, the two volumes have much in common, even though the publisher—and presumably Auster himself—is promoting the books as different. In the former, Auster chronicles his travels, mostly, including a tour de force of physical addresses that have served him as both house and home throughout his life, whereas in the Report Auster charts “his intellectual, political, and moral journey.” But their ostensibly divergent themes—the physical self versus the interior self—are very much two sides of the same coin.

In his autobiographical prose, Auster comes across as a man teetering on the edge of an existential precipice, where the process of remembering is not so much a winner-take-all way out but rather a momentary staving off of the inevitable. The decline that comes with the passing of time has propelled many a writer—not to mention countless ordinary folk—into recalling people and places, events and happenings; but in Auster’s case, the project derives its strength and beauty from the author’s tonal trepidation. Writing about himself in the second person, he sets out after “exploring his mind,” sorting and sieving through scores of victories and defeats, including the now-obsolete belief that “God [is] everywhere.” Exhibitionist though some of it may be, the details soften the blow that comes with the realization that then as now, “the real is so defiantly at odds with the imagined.”

The things that have helped shape Auster the man into the internationally renowned writer we know, like the movie The War of the Worlds, which he saw as a kid, or French poetry, or the failure of his first marriage, are here presented as parts of a larger whole, one that’s also much larger than Auster himself. It is the humble manner in which Auster approaches his past and then writes about it in equally tentative prose that make his autobiographical books engaging on so many levels.

The Report is divided into four sections, the last of which, “Album,” features dozens of photographs. The other chapters concern Auster’s   adolescence, his enduring experience of cinema, and the unexpected delivery of a stash of long-forgotten love letters. Figuring out how the sections coexist and echo one another is half the fun of this volume, although the reader should also be prepared to take things as they come, so to speak, for while Auster’s design might indeed hold all the reminiscences together, ultimately it is Auster’s slow-paced delivery that acts as the proverbial glue that holds the reminiscences together for us as much as for the author himself. Toward the end, Auster tells us that he writes because writing makes him feel human, and we couldn’t agree more. We overlook his occasional repetitiveness and instead celebrate his wish to position the process of remembering where it belongs: at the forefront of the human experiment.