Translation Changes Everything: Theory and Practice by Lawrence Venuti 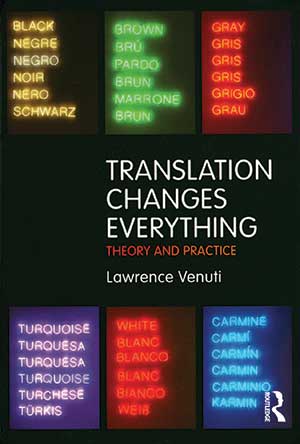 Translation Changes Everything contains fourteen essays by Lawrence Venuti, professor of English at Temple University, one of the most influential theorists in translation studies. Except for one previously unpublished essay, the remaining essays have all been published since 2000 in journals and in edited books. Although each is independent, the essays cohere as a collection and project the trajectory of Venuti’s thinking as he deals with a variety of wide-ranging issues in translation.

Venuti agrees with other theorists that translation is not merely a semantic transference of meaning from one language to another. The act of translating, as he and a few others have argued, is a cultural and literary process subject to many factors that influence it and determine the outcome. In the final analysis, it is an interpretation by the translator in accordance with multiple elements, conscious and unconscious, affecting the final product. They may be linguistic, literary, psychological, historical, cultural, or societal elements, and they may influence different translators in different ways at different times. Each of the fourteen essays of this book is a consideration of aspects of these issues related to translation, including ones related to translations by Venuti himself.

Dense as Venuti’s prose is, I find that the most interesting parts of his writing in this book are those in which he deals with a particular translation and brings out the issues mentioned above in the very practice of the translating act itself. This is true when he knows the intention, culture, and education of the translator, and this cannot be truer than when he deals with his own translations in some of his essays. But it is also true when he deals with other translators and applies the same criteria to them and their work.

Venuti is suspicious of any attempt to draw a sharp distinction between theory and practice in translation because no practice can actually happen without a theory behind it, and he emphasizes that translating is always subject to certain assumptions that enable it and simultaneously constrain it. In the end, he calls for “a translation culture,” that is, a culture in which translated texts are recognized not only as writings distinct from their source texts but also as indispensable contributions to the receiving culture and to intercultural communications in the world. With this translation culture established, he believes that everyone will be in a better position to appreciate translations as translations in their own right, and to rid translators of the cultural marginality to which they are usually relegated.