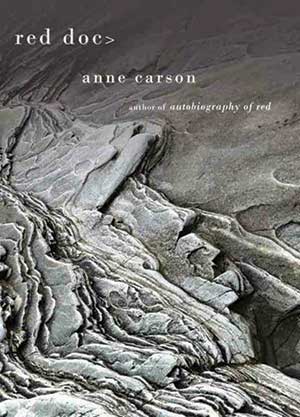 Anne Carson’s Red Doc> is a brilliantly conceived hybrid both in form and content. Boldly mischievous in tone and risk-taking in spirit, it is like no other book you have ever read. The story drifts somewhere between the time of ancient Greek mythology and modern life; the characters are half-monstrous, half-human; and the format is a witty genre-crossing mix of poetry and prose. Visually, the book looks different, too, its text abruptly narrowing into long, thin columns that resemble rows of newsprint rather than pages of a book. Then there is the accelerated pace of the narration, the words spaced but not punctuated into brief sentences and phrases that tumble down the page at breakneck speed. There are no chapters, but at intervals pauses in the narration occur in sections inexplicably titled “Wife of Brain,” which provide a kind of ceremonial seal to the units of action. Finally, there is the playfully offhand title of the book that evokes a casually created computer file, a work in progress that is ready to be modified.

The central story of Red Doc> condenses around a phantasmagoric road trip in which the two mythical protagonists of Carson’s earlier verse novel, Autobiography of Red, reappear. Geryon, a red-winged cattle herder now known as G, and his former lover, Heracles, a war veteran now known as Sad, drive by car with their madcap artist friend, Ida, through a surrealistically glacial landscape studded with ice mountains like “panels of torn planet” and replete with ice bats “the size of toasters” on a journey that includes stops at a body shop and a psychiatric clinic. Their alternately breezy and dispirited conversations along the way give the characters an eccentric, passive air that at times can make their state of mind seem almost posthumous: “Whatever / happened to your / autobiography says Sad / . . . I / gave it up says G / nothing was happening in / my life.” This makes for an exasperating but compelling read—we advance, tantalized by our own uncertainty of what the characters will do or say.

Ultimately, the whimsical odyssey has a serious destination—the room where G’s mother lies dying in a bed “as / big as a speedboat.” Until now, Carson’s use of poetic language has been random and casual, but here poetic unity is seamless, and the novel comes metaphorically alive in a deathbed scene of unforgettable lyrical intimacy: “And the / reason he cannot bear her / dying is not the loss of her / . . . but / that dying puts the two of / them (now) into this / nakedness together that is / unforgivable.” At the moment of her death—“This roaring air in his arms”—he is stunned by the force with which sensations of freedom and relief contend with feelings of grief. And the Wife of Brain sequence that intervenes is hauntingly lucid: “Mothers ashamed and Ablaze and clear / At the end / As they are / As they almost all are, and then / Mothers don’t come around Again / In spring.”