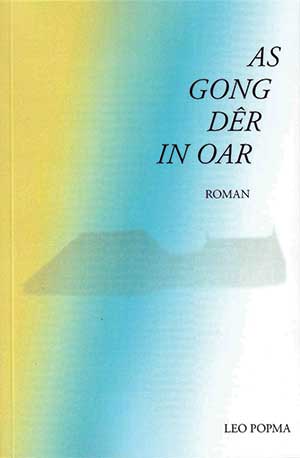 Leo Popma has written an intriguing story with an intriguing title, As gong dêr in oar (As if another went there), a story that sometimes confuses and often mystifies, for there are secrets within nearly every character.

Mare and Johan, the main characters, are spending a week’s vacation in a small, remote village by the sea, where Mare worked as an au pair many years ago. Both have the baggage of personal histories. And it is in this tranquil spot that the turbulence of those histories begins to reverberate as they gradually emerge through constantly shifting, episodic flashbacks. Mare, a professional interpreter with the European Union, bears the scars of a conflicted childhood, the reputation of an out-of-control party girl in her younger years and the weight of responsibility for a sixteen-year-old born out of wedlock. Johan, an architect, continues to be haunted by the violent death of Max, a close childhood friend from Indonesia, and by the heartbreak of losing his first love.

Predictably, tensions arise between them from their disparate histories and temperaments as well as from the “necessary” lies and secrets that create distance between them. Conflicted relationships affect nearly every character. At the book’s center is Johan—who witnessed the shoot-out that killed Max in the hijacking of the passenger train—the boy from Malaysia whose extraordinary mind, passion for justice, and violent end left a permanently disturbing imprint. And his heart won’t heal from the broken relationship with Josi, who had to let him go, though there was real love between them. But Mare will not let him go, though there is seemingly no real love between them; Mare who forcefully insists on fidelity to one’s origins—language, culture, place—versus his unsentimental disdain for hanging on to an “illusion, a homesickness,” a dying past; Mare who expects him to mean something to Nyk, her son (and, as he discovers, who may be his own son, too).

And then there is the complicated relationship of Mare to friend and rival Inge, to Nyk and his widely divergent interest and direction from hers, but especially to her own past—her separation from her deeply rooted identity in a unique culture and language that she cannot let go or compromise.

In fact, nearly every character in this novel suffers from estrangement and disconnection, from homesickness for the place and the people they left behind but which yet inhabit them. Indeed, the reader sometimes wonders whether the author meant to write an essay on the inextricable bond between language, culture, and identity, for the theme keeps recurring.

For Mare, her frantic search for a “true home” proves futile and, finally, fatal. For Johan, the wandering ends when he acts on Mare’s invitation spoken in jest at the beginning: “And if you’ve had enough, go walk into the sea just like René Lung.”

The serious reader will appreciate the thought-provoking substance of this novel.