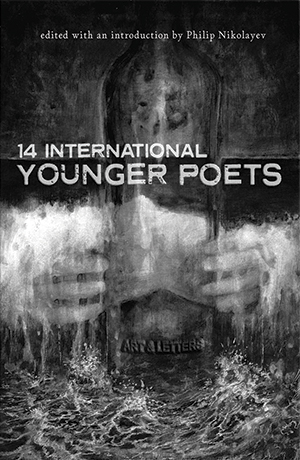 14 INTERNATIONAL YOUNGER POETS, a volume edited by Russian American poet Philip Nikolayev, seeks to carve a space that represents emerging poetic consciousness through the talents of younger poets. In the words of the editor, “This vibrant new poetry community, geographically far-flung and engaged in lively cross-pollination, is a striking example of the spontaneous, self-organizing force that is poetry.”

The poems range in subject from the deeply personal to those that wrestle with large questions and reflect life’s grandeur. A poem such as Blake Campbell’s “The Millennials” could be an anthem with its paced rhythm and rhyme, reflecting the despondency and gallantry of this generation. My personal favorite poet in the volume is Raquel Balboni, a Massachusetts-based poet and publisher whose work contains attentiveness to emotive detail. The boredom of creatures (“Passenger”) such as the dog in the opening line strikes the reader with immediacy, but we do not linger on the suffering. Other poems represented, such as “Happy New Year,” frame the logic of time with language that reflects sensual life instead of the impersonal refuge of abstraction. “Move closer honey oyster,” Balboni writes, “Relax your feral mouth.” Isolated, these lines contain affection and rage as well as a plea. However, the rhythmic inundations create abruptness and immediately signify the mouth with the open, soft sounds.

Sumil Chaudhary is another striking poet. His poetry is sublime and spontaneous, original and reflective. The language is romantically tinged but apprised by modernist style. This conjunction influences thematic device: “not the fonts of masterly chatter / but waft soft eyes on headless tatters / of the hooded tunic hung in the garret.” The obscurity of theme lends itself to questions. As a reader I enjoy considering this a war protest poem. Such a theme absconded within the narrative links obscurity with emptiness.

Andreea Iulia Scridon’s poem “Carapaces” also strikes a nerve. Using texture as analogy, lines such as “screen’s alabaster light” provide the reader with reflection on the opening sentiment, “How grainy the present has grown.” The poem is about watching a loved one experiencing old age. This provides an interesting parallel to the thematic consciousness of the anthology, that of younger poets. Scridon’s “Passepied” is another example of a carefully crafted poem with musical quality. A passepied is a triple-meter French court dance. The poem is a sincere song of personal grief. Its lyrical content and use of internal rhyme often induce hypnotic qualities that align with the poem’s feeling.

A poem is a unified idea, and often anthologies, catered to the individual editor’s tastes, are also unified by an idea. Although the title 14 International Younger Poets seems misleading because the poets are mostly located in America or India, rather than a wide sample of international poets, the poems are stylistically and thematically international. Poetic devices vary in character, and linguistic technos and symbology also reflect variety. Poetry has the mainstay of “realizing the universal” through culture even as it reflects the individual character of the poet. This is a sure way to recognize a poem’s greatness.

14 International Younger Poets is largely experimental verse on the pulse of the contemporary era. The poems do not have hopeless, nihilistic tendencies but instead offer promise, sensitivity, and intellect along with lyrical abandon. These are fresh poems within an idiom of either grief or delight; poems that are often logical, sensible, referential.