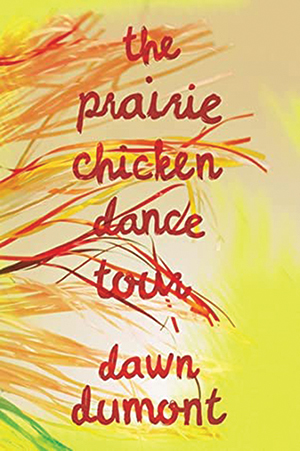 JOHN GREYEYES “only wanted a coffee in the morning and a frying pan of beans and wieners at night,” but living on the reserve, “everyone felt like they had a stake in his personal life.” When his brother raises those stakes and pushes John into managing the Prairie Chicken dancers’ fifteen-day-long European tour, it’s short notice and the troupe is short on funds: complications and comedy ensue. Handling 250 cattle is easier than handling three dancers.

The stakes are higher for Dawn Dumont, too; she hones her craft in her fourth volume of fiction about Indigenous life on the File Hills reservation land, in present-day southern Saskatchewan. Dumont’s upbringing there, in the Okanese Cree/Nehewin Nation, both informs and infuses her work. Nobody Cries at Bingo (2011) and Rose’s Run (2014) focus on female protagonists from the Okanese. Linked stories in Glass Beads (2017) present diverse perspectives—urban/rural, reservation/bush, male/female—that weave silences alongside stories. And here, narrative techniques combine: Edna’s tour diary secures each day after the first, enriched by other members’ kaleidoscopic perspectives. Traveling through Europe in June 1972, members explain being Indian—“the kind with tipis and the buffalo . . . that John Wayne shoots.” Reception varies; in Germany, Desiree observes she is exoticized as a “special Indian” rather than disparaged as a “dirty Indian” in Canada. There’s talk of lip-pointing, moose meat, and bannock is plentiful, yet these characters remain individuals, not types.

Language reveals character and culture. Nehewin words are incorporated seamlessly, and the figurative speech reflects Indigenous experience (Edna’s belly “flip-flops like a two-day-old salmon”). Perspective impacts expression: “She was what the old people called ‘with child,’ and what the young people called ‘knocked up,’ and what everyone agreed meant ‘ruined.’” And silence matters, for instance in Edna’s occasional “shutdown”—a state of being that John recognizes from boarding school. Given the intergenerational effects of residential school, racist education policy, poverty, colonialism, and discrimination, laughter is an essential tool for survival; as in the fiction of Thomas King, Richard Van Camp, and Eden Robinson, somber themes are countered with comic scenes.

Contracts and capabilities shift on the tour, reflecting the importance of adaptation and resilience against a backdrop of ceremony and tradition. Despite John’s inexperience, The Prairie Chicken Dance Tour deserves top-billing: it’s an exhilarating caper, entertaining from day one.