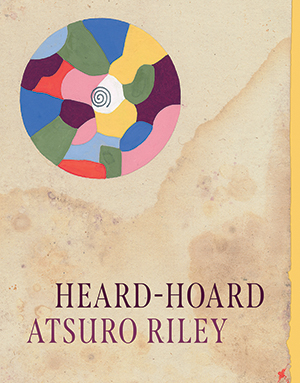 IF YOU WANT to understand what the poet Atsuro Riley is up to, start with the title of his second collection: Heard-Hoard. This could be the name of a hymnary, a mystical almanac, or even a book of spells; the phrase promises a great store of sound and story, gathered up through generations. Sonically, its half-rhyming Old English monosyllables preview the strong, dense music for which Riley is known. Linking the two words into a kenning also immediately positions Riley in a poetic lineage from Gerard Manley Hopkins—one thinks of his poem entitled “Heaven-Haven,” for instance—to Seamus Heaney. (In Heaney’s “North,” we find the admonition: “Lie down / in the word-hoard . . .”) Most of all, the title unabashedly lies outside the naming conventions of much contemporary poetry; this book will not be like others, the title announces.

Paradoxically, the book is no less unique for the fact that Riley returns here to the same terrain as his much-lauded first book, Romey’s Order (2010), which was set in the South Carolina low country where Riley grew up. Some characters recur, and two poems repeat in much-revised form. But these are profoundly different books. Romey’s Order was grounded in named geographies, a defined child-narrator (the titular Romey), the identifiable biographies of his ex-soldier father and Japanese mother, and specific memories. Heard-Hoard is far stranger, sparer, and more abstract, with more universal claims about the human condition and the powers of language. Riley is like a painter who increasingly allows color, form, and texture to be his guide, as he becomes less concerned with making the subject or the narrative explicit to the viewer and more interested in creating universal sensory, emotional, and philosophical effects.

The first poem in the collection, “Crackler,” declares that the book will aim straight for “What came to seem to him the core // (the pulsing core),” which is “a lit / meat-mesh of heards” and “tales he’d gnawed.” The book moves deep into this “pulsing core,” a mythic realm that is hot with dirt, flesh, “meat-mesh,” and the irreducible, luminous “ember-words” of his experience. What Riley means by “the core” is visible in the brief poem “Chorus: Seed,” a snapshot of a child: “The knee-boy / bent to his daddy’s shoes / spit-gobbetting and rag-shammying // hard for shine.” This scene may seem to be generic, in a sense—with no location, temporal markers, or contextual details—but it conveys the feeling of both an intensely specific personal memory and the beginning of a myth. Riley compresses several valences into the first two lines. The boy is made into a worker down on his knees polishing shoes—and also a supplicant before the absent father, symbolized by “daddy’s shoes.” Riley’s use of the “knee” evokes the forces that interrupt the innocence of childhood—being thrown over a parent’s knee to be spanked, or even the racist playground chants using the phrase “dirty knees” to target children of Asian origin. (Heard-Hoard, like Romey’s Order, contains powerful descriptions of anti-Asian racism and violence in the communities where Riley grew up.) Here, the “bent” child seems to be the grim axis around which this family’s life revolves, almost in the way that Caravaggio’s painting of Narcissus centers on that boy’s brilliantly illuminated knee. Next, the actual task—polishing the shoes—is disaggregated into two components, rendered in Riley’s characteristic diction: turning the nouns “gobbet” (which can mean a small quantity of liquid) and “shammy” (a cloth of chamois leather) into verbs that can take a gerund form. In both cases, these coinages seem almost onomatopoetic of the actions they describe, with “shammying” calling up the rapid shimmying friction of the cloth polishing the shoes. These consonant-heavy phrases convey a jumpy anxiety to please, a twanging desire to do the task right. The stanza break suspends the actions in time for a moment, before three firm, monosyllabic punches end the poem. “Shine” is a pun—both the glow of burnished leather and parental affection (as in “I’ve taken a shine to you”) held out of reach—that also transforms the shoe-polishing from filial labor into an aesthetic act. The “knee-boy” becomes a figure for the poet, laboring to draw beauty out of the worn things handed down to him.

When Heard-Hoard addresses poetry more directly, Riley makes clear his belief in the deep human hunger for stories. In the poem “Call,” we encounter a local bard, “the story-man,” whose language has the capacity for “encircling us binding us by lard-torch and ditty.” Like Orpheus, this figure can bring the world to his feet to listen, “Souls and appetites (from holler, brink, and gully) lured and drawn.” Heard-Hoard contains many examples of wicked desires and violent compulsions—from angry gangs of runaway children to a tormented former prisoner of war—but the “story-man” represents a way of being together that satisfies our deepest “appetites” and makes room for our “souls.”

The stakes here are extraordinarily high: salvation, protection, soul-fashioning. In “Creekthroat,” the river-speaker says, “By hook or by bent, I guttle the rudimental stories.” (“Guttle” means to devour noisily; alongside figures such as Harryette Mullen and Lucie Brock-Broido, Riley has one of the most memorable vocabularies in contemporary American poetry.) This ravenousness for the “succor-food” of lore intensifies throughout the poem, which builds toward a chilling final couplet: “This old appetite as chronic as tides / on foot or by boat by night (please) come slake me with radicle stories.” The desperation of “Creekthroat” is sincere, because in Riley’s universe the alternative to beauty is fear and the evils it leads to; he writes in another poem, “That a body gets (a soul gets) fostered same by beauty sure by fear.” The “rudimental stories” are a way to get and keep access to beauty, despite relentless adversity—and to let beauty, rather than fear, shape one’s body and one’s soul.

This, too, is what Heard-Hoard does. In these pages, Riley creates a uniquely American idiom—expressive, earthy, and flat-out dazzling—that will slake and succor readers for many years to come.