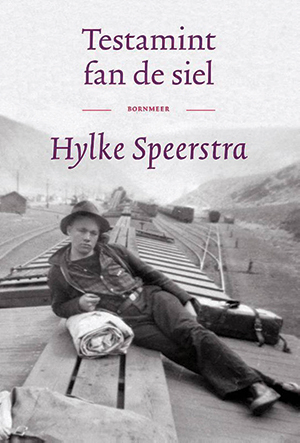 IN TESTAMINT FAN DE SIEL (Testament of the soul), the eighty-five-year-old novelist Hylke Speerstra creates two characters of Frisian descent living in Canada. Thomas Akkerman and Ids Faber are in their mid-eighties when they meet each other for the first time during the Calgary stampede. Speerstra uses these characters to examine and compare the themes in his novels, stories, and documentary books published since the late 1960s. His subject matter is often the lives of Frisian farmers and farmhands, canal skippers and their wives, ice skaters, emigrants, general practitioners, and soldiers who fought or who refused to fight in the Indonesia decolonization war.

Both men have lost their beloved wives and are trying to cope with the remainder of their days. Despite their wealth, caring children and grandchildren, they are having difficulty finding their bearings. During their meeting in Calgary they tell each other parts of their life stories and discover they have much in common in the hardships of their youth and, especially, their difficult relationships with their fathers; in Thomas’s case because of his father’s frequent absences, and in Ids’s because of his father’s political ideals and his subsequent absence. Both men have always found it hard to tell their children about their youth and their parents, but now that they are in their eighties, they decide that it is time to divulge whatever it is that is still nagging their souls. They encourage each other to write their life stories. Thus, ingenuously using several time frames, Speerstra vividly recounts the most interesting details about the lives of the two men. In an immense tour de force, he manages to bring together the main themes of his works in this depiction of their lives.

The reader may feel uneasy about the familiarity with which the two men speak to each other after only one meeting. At the end of the book the novelist tries to lend credibility to that familiarity, but it may not convince every reader. While readers will look in vain for deep, soul-searching psychology, they will discover impressive stories about poverty, loyalty, and love. Indeed, this testament can be valued as one of Speerstra’s greatest works.