The Books of Jacob: A Novel by Olga Tokarczuk THE YEAR IS 1752  (the page, 900-or-so), and a carriage is barreling through misty Podolia, a historic region that now sits on Ukraine’s eastern border. Rumors of a young and charismatic Jew, said by some to be the Messiah, reach the region’s townspeople through long chains of scholars and merchants along the trade routes from Smyrna (Izmir) on the Mediterranean coast to the settlements on the North Sea. Whether Jakub Lejbowicz Frank is a true mystic or a fraud is not clear, neither in Nobel laureate Olga Tokarczuk’s long-anticipated The Books of Jacob nor in the history books. Jacob Frank, as he would come to be known, was a real man who inspired legions of followers into “Frankism,” a Sabbatean Jewish movement that held, at its core, the belief that people should transgress every moral boundary they know. The movement espoused “redemption through sin”: fast days became feasts, and rules on modesty, purity, and even incest were overturned.

Tokarczuk never gets too close to the character of Jacob, instead presenting him through the eyes of his contemporaries, both ardent believers and staunch skeptics. She is particularly attentive to the perspectives of women and outsiders, who bore the brunt of the Enlightenment’s growing pains yet are conspicuously missing from official histories. This polyphonic approach is never deliberately obscure: each character has a deep, sincere, and (because it is in Tokarczuk’s nature) often humorous “psychological portrait.” We get glimpses of the supposed Messiah as a child, saying goodnight to every soul in the world, like Adam naming the creatures of Eden. Yente, an elderly woman on her deathbed at a wedding, is given a Kabbalist amulet to postpone her death and, with a conspiratorial smile, swallows it. She floats into a state of permanent omniscience, “a witness, an eye that travels through space and time.”

In addition to Jacob and the not-quite-dead Yente, we meet a broad cast of supporting characters: Jacob’s wife and daughter, Asher the world-weary doctor, the Kabbalist Shor family, the literary Rabbi Nahman, and Father Benedykt Chmielowski, who maintains a long and entertaining correspondence with Baroque poet Elżbieta Drużbacka on his encyclopedic works. The title of the real Chmielowski’s encyclopedia—the first in Poland—mirrors Tokarczuk’s own extended title for the novel (“New Athens or the Academy full of all science, divided into subjects and classes, for the wise ones to record, for the idiots to learn, for the politicians to practice, for the melancholics to entertain . . .”) and contains such amusing entries and annotations as “Horse: Everyone can see what a horse is” and “Dragons existed for sure.” Drużbacka, less whimsical and more resolute, urged Chmielowski to stop writing in Latin and make his text accessible to women and the lower classes. As a lyricist, she wrote mostly on beauty in nature but also composed poems like “Complaints from a bunch of ladies, because they do not want to live with their husbands” (my inelegant translation). Whether the two ever met in real life, we will never know.

Tokarczuk covers all the calamities of the era—pogroms, war, abject poverty—but pays mind-bogglingly detailed attention to everyday spectacles: kitchens and courtyards, fairy tales told to small children, dances, Turkish tobacco, embroidered tablecloths, the arrangement of the merchants’ caravans snaking their way through Europe—all evidence of years of research. The Books of Jacob contains an entire overflowing, sensual world to get lost in. Hopelessly lost, in fact, for everything in it has a disorienting aim—from its obfuscating weather (“great grey fustian clouds”) and temporal shifts, to the migratory catalog of characters with many names. Even the pagination runs in reverse, like a Hebrew book, perhaps reminding us that every familiar order only exists out of habit.

Of course, all heresies and heretics call the existing order into question. With three major religions at play (and countless minor ones), the pent-up historical energies bubbling under the surface of Europe are ripe for release. The Enlightenment was a time of great contamination and diversity—of ideas, people, religions (not to mention a host of nefarious viruses). Tokarczuk captures this corner of society at the moment it is held open in suspense; its failure to be whole, together, or complete creates that vital opening for the coming of something new—a self-proclaimed Messiah. Jacob’s pragmatism (converting to new religions when they became convenient) and spiritual hedonism may have been heretical, but they also laid foundations for a distinctly modern disregard for dogma and tradition.

In her translator’s note, Jennifer Croft calls the book a polyglot. Like all encyclopedias, histories, and sacred texts, it exists in conversation with many others, and not only its contemporaries. It references scores of figures and fables, each mysterious enough to warrant a history of their own. Croft’s translation is energetic and inventive; she’s proven to be a brilliant collaborator with Tokarczuk, having previously translated the award-winning experimental novel Flights. Her work is attuned to Tokarczuk’s polysemy, the delicate ambiguity built into the Polish language—an ambiguity Tokarczuk has previously lauded not only for its use in poetic language but also in political critique.

Tokarczuk writes that “history is simply a never-ending interpretation of real and imagined events from the past that allows us to perceive formerly invisible meanings in it.” Whatever meaning we find in his story, Jacob Frank himself remains beyond our grasp—as a shape-shifter, an enigma, a sage, a revolutionary, a quack, who nevertheless sparked an entire movement around his ideas. It is our job to answer how—or why. Perhaps it seems like an odd time to study the forgotten history of a Jewish mystic and the cult he inspired, but at its heart, The Books of Jacob is about the desire for emancipation amidst a fractured and multifaceted reality—one that looks a lot like ours. And a Messiah, even an ambiguous one, only ever arrives in the darkest moments of human scourge, war, persecution, and rot.

This colossal book is a truly bewitching account of untold fissures in history, minor religions, little lives, and splinterings-off. It is rich, strange, astonishing in scope, and delightfully enigmatic—whether the reader plunges deep into its metaphysics or simply obtains “some slight enjoyment” is up to them. Tokarczuk’s magnum opus shows us a world on the precipice of a great change, one hand clinging to certainty while the other reaches for transcendence. Of course, history shows us that certainty doesn’t exist, and we will have to live with that—or wait for our Messiah. 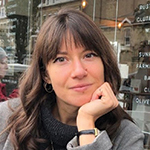 Originally from Canada, Hannah Weber is a writer and editor based in Brighton, UK. She has published work in World Literature Today, Words Without Borders, and the Calvert Journal, among others. She also translates from German.