How Literatures Begin: A Global History 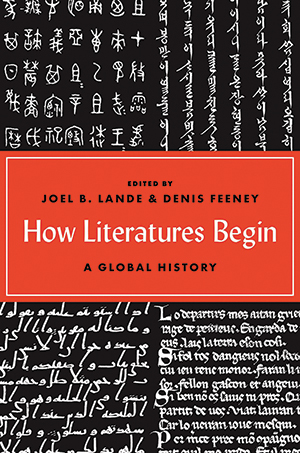 TRYING TO THEORIZE the beginnings of a phenomenon involves equal parts fascination and frustration; both are in full evidence across the many sections of editors Joel B. Lande and Denis Feeney’s breathtaking volume How Literatures Begin: A Global History. “There are two obvious conceptual complexities that all of us face when trying to make sense of the problem of ‘the beginning of literature,’” the author of the chapter on Indian literature insists. “The first complexity is what we mean by ‘literature,’ the second, what we mean by ‘beginning.’” Rather than strive for definitive answers to such impossible questions, How Literatures Begin endeavors to show readers seventeen ways of approaching such questions, thereby revealing disparate contexts and perspectives on this fundamental premise.

Readers of the Japanese chapter, for example, will learn how the modern idea of Japanese literature was formed using a nineteenth-century Western model of national literatures—“excising the large corpus of literature in the cosmopolitan language of Literary Chinese; [upgrading] the novel at the expense of the much more prestigious premodern genres of poetry; and [elevating] dramatic literature . . . to the status of highbrow literature”—and then be presented with alternative narratives of the birth of a literature that can be deemed Japanese. In this vein, such varied chapters on different literatures (“Korean,” “Latin,” and “Syriac” being straightforward examples; “Romance Languages,” “Latin-American,” and “African-American” being more wonderfully unexpected) provide counterimages and counternarratives to the nation-state framework underlying so much of commonly received literary history.

One striking throughline is how deeply pervasive European colonization has been in cultural terms. The African chapter explains how the continent’s wealth of cultures and tongues was flattened or erased by a European missionary and colonial presence into a single continental literature: “Irrespective of language or region, the King James Bible, Bunyan’s Pilgrim’s Progress, and the plays of William Shakespeare would become the foundational texts of African literature in the British territories. Later, the literary bureaus set up by the colonial governments in East Africa and Rhodesia would dictate the rules of what was assumed to be good writing to aspiring African writers. This explains why, in spite of their linguistic diversity, African literatures published in the nineteenth century and the first half of the twentieth century share so many characteristics.” (That the editors placed this chapter after the Latin American chapter, restricted to texts written in Spanish, is no coincidence.)

Another throughline is the discontinuity of such histories. The Russian chapter discusses how The Lay of Igor’s Campaign is an isolated example of Old Russian, and how several attempts to foster a cohesive literature in Russian came to naught. The Syriac chapter discusses how speakers (most notably Lucian) were more likely to write in Greek, and thereby contribute to a Greek literature, rather than in the language they considered merely documentary. There are many false starts, and false beginnings; for a literature to arise and persist requires so many interested parties—writers, readers, governments, distribution networks, to name only a few obvious examples—that it is easy to see how the disengagement of one can lead to the failure of an emergent literature to take root.

Which makes it all the more amazing that so many literatures should have arisen, and have developed to the point of becoming codified. And each one does so in such a singular, wholly irreproducible way; what is so wonderful about reading How Literatures Begin is the sense one comes away with, that it is somehow both inevitable and truly miraculous that any of these literatures should have come into being—and just how many more are out there for us readers to discover and explore in-depth.