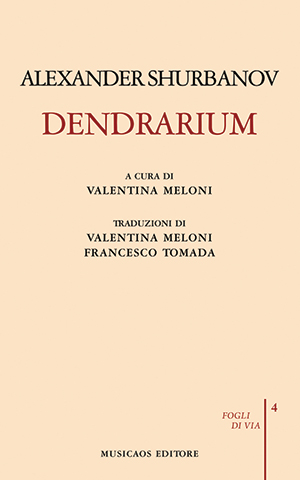 IN THE BILINGUAL English/Italian edition of Alexander Shurbanov’s book of poems Dendrarium, originally written in Bulgarian and then translated into English by the author and into Italian by Valentina Meloni and Francesco Tomada, the poet discerns the vital interdependence between the green world and that of humans. He has a sensitive creativity that’s expressed in clear but rarefied poetic writing.

Shurbanov has an enduring habit of contemplating the fate of the fragile. The trees in the forest, he observes, are many, but their names are few. This puts one in mind of the multitudes of humans massed in metropolitan and provincial jungles with their inescapable destinies. Care—concern for the survival and well-being of others—is a central theme in this extraordinary book.

But Shurbanov’s poetry, even in the compositions, so to speak, of civil reflection, always has a light tone. The lessons of haiku are present everywhere, and the three canonical lines of the Japanese genre expand naturally, like the increasingly wider circles caused by a pebble thrown into a pond.

The golden age is timeless. It is embodied in the tree next to us with its stable and enigmatic charm. But the golden age is also that of constant and changing poetry through generations of poets. In my memory, the branches that expand and touch one another in Dendrarium are those of the cypresses of Bolgheri di Carducci, those of Brecht’s plum trees, and the tallest ones up which amazed children climb to admire the stars. And now all the branches of poetry of the past come to intertwine with those of the birch, Alexander Shurbanov’s birch, which sends “a trembling greeting across the street.”