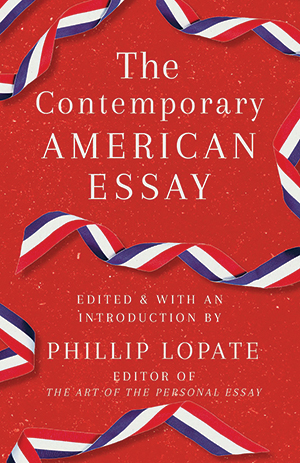 TITLES CAN BE MISLEADING. In one sense, The Contemporary American Essay is perfectly chosen. It describes with commendable exactitude the nature of this volume. But though it pinpoints period, country, and genre, its matter-of-fact plainness belies the verve and color of the contents. What Phillip Lopate has so skilfully assembled is “a vast and variegated treasure.” That description is taken from another brilliant anthology, Lydia Fakundiny’s The Art of the Essay (1991). Fakundiny says that essays “make the language of the day” perform the essential task of “saying where we are in the moment of writing.” In so doing, she reckons that—over the centuries—this form of writing has done no less than amass “the memorabilia of individual responsiveness to all that is.” This is the treasure she talks about and that anthologists tap into. Even limiting himself to a fraction of it—just one nation’s essays, written between 2000 and the present—Lopate lays a rare trove of riches before readers.

There are forty-nine essays. To attempt to list—still less summarize—them would be inappropriate in a review. In any case, essays are resistant to summary. While academic articles submit to abstracts of their main points, essays, where the voice of the individual is paramount, are a different matter. Reading a book like this is not dissimilar to taking a long, invigorating walk that winds its way through a variety of fascinating terrains. Without attempting to condense its 600-plus pages into a paragraph, noting a few of the landmarks that particularly struck this reader should give some indication of the ground covered.

Lina Ferreira, in “CID-LAX-BOG,” talks about taking part in medical trials that involve being injected with the rabies virus—and through this unlikely lens gives considerable insight into issues of immigration, deportation, and belonging, in particular as these affect international students in America who wish to prolong their stay. Floyd Skloot, in “Gray Area: Thinking with a Damaged Brain,” touches on the nature of mind, brain, and consciousness. He considers how boxing inflicted serious brain injury on his childhood hero, Floyd Patterson. With considerable honesty, courage, and self-awareness, his essay shows how he’s come to terms with his own neurological impairment. Meghan O’Gieblyn’s “Homeschool” poses a whole catalog of questions about education, particularly the ideas behind homeschooling. Her presentation of Rousseau’s Émile as “the vade mecum of modern homeschooling” is particularly revealing—and it’s useful to be reminded that Mary Shelley’s Frankenstein was written in part “as a critique of Rousseau’s pedagogy” rather than being simply the “parable about technological hubris” that it’s often presented as.

Aleksandar Hemon writes a heartbreaking account of a daughter’s death from a rare and virulent form of cancer, showing the power of words in a situation where they may seem powerless. Thomas Beller gives a luminously affectionate and atmospheric memoir about working in a bagel factory. Patricia Hampl’s “Other People’s Secrets” is an at times uncomfortable meditation on the ethics of writing. Joyce Carol Oates, in a rawly disturbing piece about imprisonment and execution, recounts her visit to San Quentin. Rebecca Solnit’s “Cassandra among the Creeps” deftly explores gender inequalities. There are also essays about disfigurement, revenge, race, vaccination, interior design, domestic abuse, and failure. And this is merely to skate over a fraction of what’s offered. Naturally, some essays appeal more than others. But all are finely written pieces. Lest the fluency of the writing make it seem easy, it’s good to have John McPhee’s “Draft No. 4,” a reminder of the sheer hard work involved in writing, and the many revisions that will have happened before each of these impressively polished essays emerged into publication.

In his short and moving “Invitation,” in which he reflects on what he learned from his years of traveling with Indigenous people, Barry Lopez suggests that “perhaps the first rule of everything we endeavor to do is to pay attention.” All of the pieces in The Contemporary American Essay are written by individuals who have followed that rule. Whatever their subject, no matter what stance they take, regardless of their background, or the cadence of the voice they elect to use, these essays are exercises in paying attention. Indeed, it’s almost as if Phillip Lopate used this first rule as his criterion for choosing what to include. It’s sad that Barry Lopez—surely one of the most accomplished nature essayists of our time—died before the book he contributed to appeared.

Unsurprisingly, given the quality of the writing that’s been assembled, the volume beautifully exemplifies many of the key features of the genre. In his influential book The Observing Self: Rediscovering the Essay, Graham Good argues that “anyone who can look attentively, think freely, and write clearly can be as essayist.” The forty-nine essays in Lopate’s selection are pleasingly varied—this is a richly diverse collection—but they all exhibit the attentive looking, freethinking, and clear writing that Good identifies as essential prerequisites. In another well-known characterization of the genre, Edward Hoagland says that essays “hang somewhere on a line between two sturdy poles: this is what I think, and this is what I am.” Again, these forty-nine essays could be arranged on precisely the line Hoagland identifies, some inclining more to one pole, some to the other, some almost dead center between them.

Many readers will be familiar with Phillip Lopate’s landmark 1994 anthology, The Art of the Personal Essay, which—deservedly—remains a key text. Putting it alongside his The Glorious American Essay: One Hundred Essays from Colonial Times to the Present (2020), The Golden Age of the American Essay, 1945–1970 (2021), and now The Contemporary American Essay makes for an impressive quartet. Each volume puts a treasury of first-rate writing before readers. Cumulatively, they constitute an important literary milestone, celebrating—demonstrating—the history, development, and present vigor of this mercurial genre. They also suggest a topic for a future essay: “On the Art of the Anthologist.” It is an art in which Phillip Lopate clearly excels.