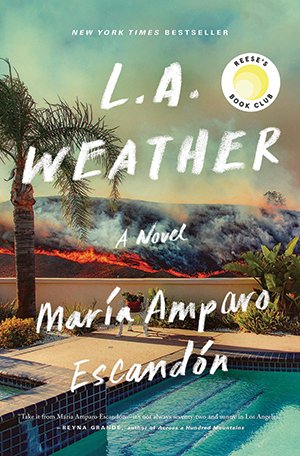 IN HER THIRD novel, L.A. Weather, María Amparo Escandón presents a well-to-do Los Angeles family in a transformational year. The book is a 2016 calendar of twelve chapters, with a running theme of climate change subtly symbolizing upheavals for the earth—as well as the United States.

Meet Keila and Oscar Alvarado, a couple in their sixties living in West LA, married almost four decades. A naturalized Jewish Mexican American citizen whose family fled the Holocaust, Keila sculpts nude couples for a Mexico City art gallery. Oscar is a Catholic whose ancestors flourished on land granted by the king of Spain, now owned by tech giants. He stares at the television in “anticipatory dread,” awaiting weather reports about the “Godzilla of El Niños.”

Keila, tired of her husband’s unresponsiveness, announces a divorce to their three daughters, ages twenty-eight to thirty-six. The daughters urge their parents to try a year’s counseling. The Alvarados put out one fire though, only to have another flare up as each daughter’s marriage combusts, too. That “L.A. trifecta of air quality” (“smog, fire smoke, or marine fog”) obscures the reason behind Oscar’s weather obsession. Finally, Escandón reveals his secret.

Daughter Olivia asks her childhood nanny, Lola, to babysit the one daughter’s twins after they almost drown under her parents’ care. Lola hesitates, considering Olivia an enemy gentrifying her Highland Park neighborhood. Lola loves “all the weirdness that LA had to offer, if you knew where to look,” but sees “prospectors, speculators, flippers, and developers” creating “a playground for affluent hipsters.”

Reminiscent of David L. Ulin’s Sidewalking, Escandón movingly renders “hundreds of cities within.” A “constant influx of immigrants arriving with their dreams” makes Los Angeles “whatever you wanted it to be.” In fact, the City of Angels itself seems the strongest character. Although LA has one of the largest homeless populations in the country, the novel barely mentions the issue. Instead, we meet three cousins who work an almond orchard (Lucas, Mario, and Saúl) and see mom-and-pop restaurants. Escandón juxtaposes a “doggie bag with quail egg ravioli in saffron cream sauce and shaved Parmesan cheese” from Vittorios against tacos from Martha’s to illustrate “the cultural mix that was Angeleno cuisine.”

It’s a fast-paced tale akin to running the Los Angeles Marathon, which also makes an appearance. So do leftover embryos in a cryolab. One character thinks through gender identity. There’s a brain tumor, possible breast cancer, stillbirth, the future of cars, infidelity, multitasking, surrogate pregnancy, shoplifting, multigenerational housing, solar panels, and a divorce attorney nicknamed “T-Rex.” Escandón straddles a delicate line between cultural sensitivity and socioeconomic diversity, infusing situations with humor as in a television series—which is under development, in addition to a Spanish translation.

At Thanksgiving, the Alvarados review 2016, especially the election. As the tale closes, little fires still smolder into 2017. “That’s L.A. for you,” quips someone.

Humans may be encroaching on nature, but in L.A. Weather, nature invades humans.