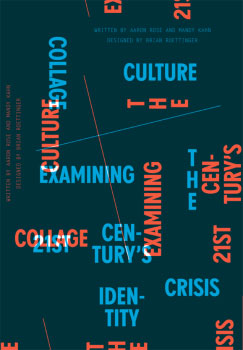 Collage Culture is itself something of a collage—a team effort by multidisciplinary writers Mandy Kahn, a rising star of West Coast poetry; Aaron Rose, director of the film Beautiful Losers and co-curator of lacma’s incredibly popular Art in the Streets; and designer Brian Roettinger, whose included collages were computer generated according to a set of rules programmed by Chandler McWilliams. The book extends into aural collage as well, in collaboration with musicians No Age, who wrote the score for a companion vinyl LP, which features another dozen writers reading selections from the book’s two essays.

The text of the essays, creatively typeset by Roettinger, resembles the vorticist magazine BLAST! without assuming its quaintness, and is generally subtle enough not to annoy. Kahn’s essay begins with her own observations as a young adult in early 2000s Los Angeles, as contemporary hipster culture took root in the detritus of the physical past and the overflow of digital information. Kahn references Rauschenberg, “ironic moustaches,” and Girl Talk as she analyzes the cognitive dissonance that our rapid-fire cultural collaging encourages—epitomized, she argues, by the complete dissolving of tone. Kahn’s style is casual-smart, with frequent brilliant phrasings, even mantras: “Creative prowess is the new wealth,” “There is danger in a landscape of meaningless symbols,” and “But nothing feels more tired than a predictable rebellion.” While I don’t always agree with her conclusions, Kahn’s clearly stated opinions prove their author’s consideration of the collage culture, “with [her] most thoughtful scrutiny, the kind we save for art.”

Rose’s essay, “The Death of Subculture,” begins like Kahn’s as bildungsroman, charting his own experience as a teenager eager to fit into subcultures, important incubators of rebellion and, therefore, of the new ideas it often foments. Rose’s outlook is ultimately optimistic; he hopes that we can springboard from the subcultures of the past, to which technology has allowed us unprecedented access, as we “strive to lead a total existence of innovation.” Collage Culture is a celebration and history of its namesake culture, an important challenge to live and create in the present.