A Muslim Suicide by Bensalem Himmich 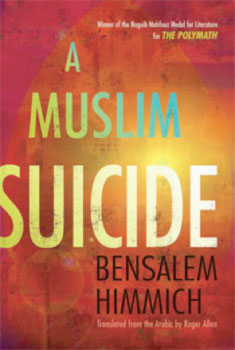 This is the third novel by the award-winning Moroccan writer Bensalem Himmich that Roger Allen has translated. Like the previous two, it is a historical novel—and this time, it is about the Sufi philosopher Ibn Sab‘in (1217–69 ce) from Murcia in Al-Andalus (Islamic Spain). He lived in the turbulent days of the Christian Spanish reconquista when adverse conditions in his homeland forced him to flee to North Africa, then to Cairo, and then to Mecca, where he died.

The novel is a first-person autobiographical narrative by Ibn Sab‘in himself. Himmich, a professor of philosophy at Muhammad V University in Rabat and Morocco’s minister of culture since 2009, has successfully re-created not only the social and political conditions of Ibn Sab‘in’s times in this novel but also the religious and intellectual debates that accompanied them. Muslims maintaining a literalist view of Islamic orthodoxy were against those who, like Ibn Sab‘in, taught Sufi mysticism and philosophy. Political authorities sided with the literalist theologians and jurists for expedient reasons and pursued their opponents. Hence, Ibn Sab‘in was often on the run and was severely critical of Muslim rulers; but wherever he went in his escape, which eventually led to Mecca, he had admirers and disciples.

During his stay in Mecca, the Egyptian widow Umama visited Ibn Sabin, and he married her only after his wife had died on her way to join him. He thought he could finally settle down to a happy life and be surrounded by learners and admirers. But Baybars, the general of the Mamluk armies, who had defeated the Crusaders in Egypt and the Mongols in Palestine, occupied the Hejaz; and his forces in Mecca searched for Ibn Sab‘in but failed to find his hiding place. After they left Mecca, Ibn Sab‘in learned that spies were plotting against him, so he decided to send his wife away for safety and stayed behind to live a secluded life. He then fell badly sick and had fearful nightmares of Baybars threatening to kill him. He went to the Ka‘ba and, while having feverish visions, saw Baybars’s soldiers surrounding him, pounding and throttling him, and finally slitting his veins with his own dagger. The novel ends here with Ibn Sab‘in saying, “As I breathed my last, I kept repeating: ‘A Lord ruling, a servant dying, a vision looming, a truth proceeding, and you thus being; A Lord ruling, a servant dying, a vision looming a truth proceeding. . . .’”

While a dying man cannot report his own death (let alone write his life story), there are historical records that Ibn Sab‘in committed suicide at the Ka‘ba.