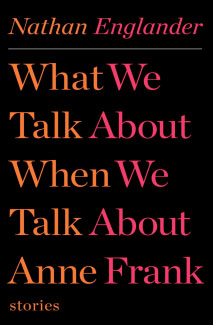 One of the most intriguing things about Nathan Englander’s stories is the element of surprise. Even if I think I know where the tale is going, it’s probably not going to go there. Satisfyingly often, my assumptions about what story and character are might be up for grabs. His first collection of short stories, For the Relief of Unbearable Urges, proved that, and this new collection has reconfirmed it.

The title story—a delicious riff on Raymond Carver’s iconic story “What We Talk About When We Talk About Love”—is perfect. It has everything: finely limned characters, reunion after many years, religious and cultural argument, and moments of epiphany, the coup de grâce, an ending that forces you to reconsider your own commitments and definitions of love.

Jewish life and the Holocaust feature in every one of these stories, but in varying ways. In “Sister Hills,” another very affecting story, Englander reveals the heart-wrenching unfolding of a promise in the Promised Land over a span of thirty-eight years. “Free Fruit for Widows” is an Israeli coming-of-age tale filled with bittersweet moments and oddly effective morality lessons that are counter to any code of ethics taught in Sunday schools. Young male fantasy life provides the fuel for “Peep Show,” which parodies Jewish guilt as though Franz Kafka and Woody Allen had invaded Englander’s dream life. Only two of the eight stories fall a bit short of Englander’s high standards: “The Reader” because it is a slightly self-indulgent insider’s tale about authors and their audiences that is never truly satisfying, and “Everything I Know About My Family on My Mother’s Side” because it is an intriguing experiment that doesn’t quite pay off.

But even when the stories are less than sublime, which isn’t often, Englander always shakes the reader up by defying expectation. The peep-show goer must engage in an even greater taboo, which turns him into an object of lust so that he can experience objectification from the other side. The desire to punish someone for as righteous a reason as anti-Semitism in “How We Avenged the Blums” turns into an ethical quandary about acquired and exercised power. And, of course, the Anne Frank game in the title story is no game. With his meticulously crafted language, Nathan Englander is always unsettling and provocative. He rarely takes, or gives the reader, the easy way out—and that may be precisely why he’s such a pleasure to read.