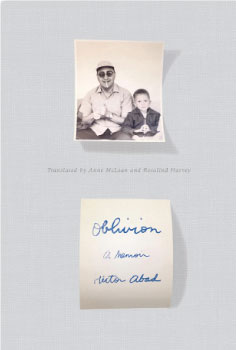 First published in 2006 as El Olvido que seremos and reminiscent of Eduardo Galeano’s Open Veins of Latin America, this work demonstrates the complexities of contemporary Colombian society as much as it does the burning desire to rescue the public works of the author’s beloved father, Héctor Abad Gómez—physician, professor, public-health specialist, and former president of the Antioquia Human Rights Defense Committee. The two are, after all, connected. In this work, his father (depicted as an Atticus Finch and a Don Quixote, alternately) fights against a society that is rife with social inequities and violence.

The memoir chronicles the life of a medical doctor, scholar, and social activist often at odds with the ruling class and the Catholic church of Colombia, especially during the turbulent decade of the 1980s and in opposition to all forms of oppression. The narrator—first as a young boy, next as an adolescent, then as a man—who recounts the life of the astounding activist does so with an honesty and clear-sightedness that eschews sentimentality. The memoir begins with “In the house lived ten women, one boy, and a man” and ends with “And if my memories enter into harmony with some of yours . . . the oblivion that awaits can be deferred a moment more.”

Abad’s father was murdered on August 25, 1987 (before the fall of the Berlin Wall, when the Taliban were allies of the United States against the Russians, and when the crème de la crème of Colombian society wished to preserve its power and wealth in the face of a huge gulf between the poor and the wealthy), and this singular act serves as the focus of the memoir, which illuminates as much about the author and his society as it does about the father. Yet to make more poignant the circumstances, the final page of the work features a photo of family members surrounding the body of the fallen hero on a Medellín street.

The author admits that he kept his father’s bloodied shirt until he was able to write this work because he “understood that the only revenge, the only memento, and also the only possibility to forget and to forgive consisted in telling what happened, and nothing more.” It was some twenty years before Abad was able to write this memoir. The key to the memoir’s triumph is Abad’s deft handling of memory. The paramilitary’s violence succeeds and soccer continues to serve as “the opiate of the people,” the work suggests, because memory or the act of remembering does not occupy a higher plane than it currently does. That is why the right wing held society hostage in the 1960s (when the author was a child) and repeated its exercise in the 1980s without massive resistance. The work’s title, Oblivion, is best captured by Mejía Vallejo’s speech at the father’s funeral: “We live in a county that forgets its best faces, its best impulses, and so life will go on. . . .”