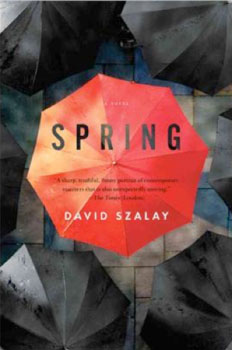 Already an established young talent in the United Kingdom for writing London and the South-East and The Innocent, David Szalay makes his U.S. debut with Spring, an understated yet complex exploration of the mechanics of contemporary romantic relationships in London. Set in 2006, the novel centers on James, a former dot-com millionaire now living day-to-day on horseracing, and Katherine, a manager at a luxury hotel hoping to one day open up her own hotel.

In a faint echo recalling Mike Newell’s Four Weddings and a Funeral, James and Katherine meet at a wedding and, soon after, sleep with each other. The two fall into the semblance of a relationship: they meet up for an occasional pint or curry, then go back to one or the other’s flat to spend the night. It’s a relationship, as the back cover says, “where ‘no’ means ‘maybe’ and a ‘yes’ can never be taken for granted.” Much of the novel maneuvers in James and Katherine’s ambivalence toward each other. To further complicate matters, Katherine still has emotional ties to her estranged husband, Fraser, an American photographer who makes his living as a paparazzo.

While the story and setting aren’t exploring new territory—though this particular version is set at the end of the money-for-nothing era—it’s the use of environment, both internal and external, and our experiences with it that makes Spring an interesting read. The novel has two sets of readers: Londoners and those intimately familiar with the Big Smoke, and the rest of the world. Szalay is a Londoner writing for Londoners, and he treats place as an insider does. The novel is filled with characters having moments at a tube stop. While an outsider might connect the unfamiliarity of a character’s emotion to the unfamiliarity of his surroundings, Szalay treats it as something commonplace. For Szalay, the places and experiences are universal and well known, so his efforts are concentrated on the gray area of romantic relationships—the maybes. In lesser hands, the novel would be romantic fiction aimed at thirty-something men; in Szalay’s, the novel is complex and exhaustive in its examination of the space between men and women.

In 2010 the Telegraph named Szalay as one of the twenty best British novelists under forty. Spring, in its poetic prose and understanding of complicated emotions, serves to further Szalay’s already promising career.