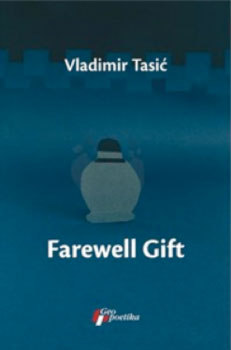 With Farewell Gift, Vladimir Tasić has written a concerto. Like a musical composition, his short novel is composed of three movements, in which the main theme—brotherhood—is interwoven with the subnarratives in a manner that recalls the interconnectedness of soloist and orchestra: Allegro, Largo Cantabile, and Allegro Non Molto. The first chapter opens on a high note: the narrator receives a package that contains an urn with the ashes of his brother, who disappeared twelve years ago and severed his connections with the entire family. The brother was a scattered and loving genius—he never obtained a degree despite enrolling in dozens of different programs and universities—who made the narrator feel intellectually inferior but also utterly devoted to him, then unexplainably left one day. The gift he sends opens up a series of questions for the narrator who, when he realized that the brother vanished, never to return, decided to build his career in software engineering in Canada, away from the mother in denial and the depressed father. None of the questions about the brother—How did he die? How did he know where I am? Where was he all these years? Why did he not contact me?—are answered, but the gift prompts the narrator to revisit his childhood and delve into his present-day life.

Written in the first person in three long paragraphs that correspond with the chapters, Farewell Gift is an intimate account about fraternal and spousal love, exile that is not initiated by political reasons, and the minutiae of a slow-paced but pleasant provincial life. Tasić’s characters are nameless and almost dreamlike, composed of nothing but gestures and emotions, and yet it is impossible not to be mesmerized by them. Tasić’s style is both poetic and humorous, with a captivating unpretentiousness. Tasić’s character is, for instance, reluctant to eat on the street in Amsterdam because “A few days before, my father told me that I was ‘our country’s ambassador,’ and I took his words very seriously.”

Farewell Gift was voted book of the year in 2001 by a panel of Radio Belgrade 2 and was shortlisted for the most prestigious Serbian literary award, NIN. Its excellent translation into English, by Bogdan Rakić and John Jeffries, is part of the Serbian Prose in Translation series, a joint project of the Serbian Ministry of Culture and Geopoetika Publishing in Belgrade, whose goal is “to promote Serbian literature to the world.” Tasić lives in Canada—where he has been teaching math at a university for the last two decades. Though he participates in Serbian culture from a distance, his prose surely contributes to the recognition of contemporary Serbian literature.