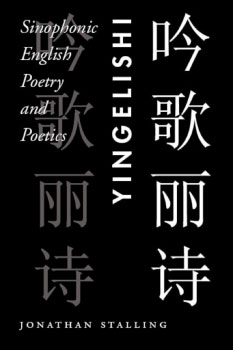 Our appreciation of poetry almost always takes place within a single language. Although poems written in one language can be translated into other languages, often-translated poems lose their unique prosody, images, and culturally specific significance. From this perspective, Jonathan Stalling’s new book, Yingelishi, can be regarded as a crucial breakthrough. This book of poetry wanders freely between Chinese and English, leaping over the gap between sound and meaning, providing its readers with an experience virtually unprecedented as the same sounds enact poetic references in both languages simultaneously.

The Chinese phrase “Yingelishi” is the Chinese transliteration of the word “English,” but the characters Stalling chose literally mean “chanted songs beautiful poetry.” Both English and Chinese meanings come through. In his book, Stalling uses this notion of “sinophonic English”; that is, English written in Chinese characters and thus spoken with a strong Chinese accent in sharp contrast with the contempt and ridicule that people have often held against so-called “Chinglish,” as Stalling sincerely seeks out the beautiful prosody within the accent. With the wide proliferation of English across the world, there are ever more accented forms of English, but sinophonic English is by far the newest and largest of these new Englishes, and “Yingelishi” is a bold step toward exploring its depths.

For instance, in the English sentence “I would like to tell you a story,” Stalling hears the following Chinese poem: 갊校／돤윱와／枯殺覃／띱鋼儉汭。The meaning of the characters are translated as “Dance of Mourning / Attracts a large audience / Grieving in vain / A beautiful woman misses her lover at the river’s edge.” Even someone who is a native speaker of Chinese would have to admit the poetic beauty that is harbored by the Chinese characters he chooses, but the poetry is equally a product of the accented English sounds these characters make: Āi wu/̌ dé lai ke/̀ tú tèi yōu/ é sī ta ̄rui. To help his readers hear the music of the accent, the book, which Stalling speaks of as a libretto, was performed as an opera at the University of Yunnan by the singer Miao Yichen along with several musicians. You can listen to the opera online at Stalling’s website (jonathanstalling.com/yingelishi.html) and become transfixed by the uncanny ways in which the two languages converge into one strange, beautiful song.

For those who have read his first book of poetry, Grotto Heaven (Chax Press), you will see that this book is an extension of his poetics set forth in his poem “Dictation”: “To speak the foreign without deciphering / is to lean toward, momentarily, / past a return. / It is to hear voices in darkness / and vanish into the greeting.”

As a poet with versatile abilities and a dynamic imagination, Stalling’s poetry aims to allow Western readers, who do not necessarily understand Chinese, to directly feel the aural beauty of the Chinese language and sense ways of attending to this beauty beyond that of acquisition and mastery. As he sees it, to understand a culture, particularly its language, one does not have to master it with the gesture of a colonizer. Better to listen to it, to make a space for it in one’s own heart and mind as a first-time student might, with awe and humble reverence, yet lost in the imaginatively perceived vastness of meanings that still lie “elsewhere.” This was the driving poetics of his first book, which has been most palpably realized in this, his second, leading to what this reader perceives as a truly poetic formula for ethical forms of appreciation.