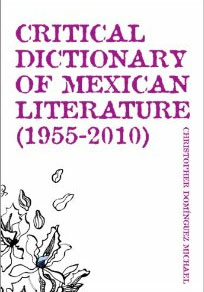 Widely recognized as one of the finest Latin American essayists and as a trenchant critic of world literatures, Christopher Domínguez Michael is also an influential cultural historian. A master stylist, he is particularly adept at fathoming the essential values of contemporary Mexican literature. His Critical Dictionary of Mexican Literature—extending from Rulfo’s masterpiece, Pedro Páramo, to the present, as his prologues explain—evinces his gifts.

To Dillman’s great credit, all 526 pages read like those of the 2007 original (revised and enlarged), quirks and turns of phrase included. Unimpeded by abstruse theories or stringently biographical apprehensions, this work is brilliantly direct and commonsensical. Above all, Domínguez Michael provides a cohesive view of a literariness heretofore addressed in individual native sources, founding his sophisticated Baedeker (not reader, encyclopedia, companion, or biographical dictionary) on correspondingly advanced readings of literature largely undiscovered in English.

Those qualities are manifest when he writes about canonical, unheralded, or promising authors. Carlos Fuentes is “a Methuselah who turned each of his years into eons and each of his novels into a prolonged agony.” On Alfonso Reyes: “It is doubtful that his classicizing endeavors managed to ‘civilize’ Mexicans.” Zelig-like in providing context, Domínguez Michael doesn’t leave readers feeling that there is a larger story to be written, i.e., that Mexican “hit lit” (Laura Esquivel, Michael Angeles Mastretta) deserves a word or two. He expounds on Ana García Bergua, Cristina Rivera Garza, and many other women with admiration and respect, while Guillermo Fadanelli merits three paragraphs. His sympathies and differences are evident.

Recovering underestimated novelists, the Joycean Daniel Sada is “the author of the most difficult book in Mexican literature,” and Enrique Serna’s historical picaresque, Ángeles del abismo, reads doubly beautifully because it took to heart the task of inventing, not reconstructing, seventeenth-century New Spain. In addition, he boldly puts in perspective, with equanimity, Elena Poniatowska’s ultimate worth: “limited by her journalism, which always ends up interfering with her fiction.” For him, Elena Garro “is the twentieth century’s great Mexican writer, the only one whose work could possibly make up for the chaos and bitterness of her errant intellect.”

For those who read Domínguez in prestigious periodicals and newspapers, his views will be consistent. Pulling no punches, he never overpromises or underdelivers. Thus his views on Jorge Volpi, contextualized by expounding on “Crack” writers’ inordinate self-promotion: “The preposterous idea that there was now some sort of ‘new’ Mexican novel, simply because in it there was no mention of Mexico or Mexicans was feted by the generally obtuse Madrid journalists’ [. . .] ignorance about Latin American literary universalism, which writers like [Padilla] have made the most of.”

Dominguez Michael scrutinizes loftier subjects like the state of criticism and national obsessions, mining some of his tropes: antiquated versus contemporary canons, authorial insecurity, banality, intellectual narcissism, misuse or absence of facts and theory, lack of originality. A critic’s critic, he conveys enthusiasm for all he reads, a vastness abetted by mordant wit. Like his models (Connolly, Pritchett, Gracq, Wilson), he strips language to its uncontaminated components while opening his veins. The Critical Dictionary is a landmark of criticism that should lead to more translations of Domínguez Michael’s essays.