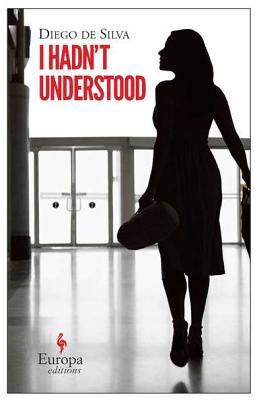 I Hadn’t Understood follows a lawyer named Vincenzo Malinconico who lives in Naples and has an ex-wife, two children, and a client affiliated with the mafia. He serves as the story’s self-identified “unreliable narrator,” and the events of his life are recounted from inside his overactive, non sequitur–prone mind. The novel, Diego De Silva’s fifth, was a finalist for the Strega Prize and won the Naples Prize for fiction.

While the plot of the novel—a series of quotidian and not-so-quotidian events—moves along nicely, the real pleasure is being immersed in Malinconico’s thoughts, which receive an artistic treatment from De Silva’s creative and funny turns of phrase. The book rings true, for Malinconico’s rambling inner dialogue bears a remarkable similarity to our own thoughts, processing along without end. His hyperbolic falsehoods are like the ones we all create to make a comprehensive story starring ourselves from the seemingly pointless and unrelated events of our lives. And like all of us, he temporarily distracts himself in the middle of some event with a random thesis on a song or love or the mafia that pops up in his mind like a gopher checking on the weather.

Malinconico muses, “There are times when I think . . . that we really should give up entirely this idea of talking to one another. Because it doesn’t do anyone any good. . . . It’s that no conversation seems to stay on topic for more than a couple of sentences; the issue is one of pertinence.” The same holds true for the conversations he has with himself. Malinconico is engaged in a losing struggle to understand his life through compulsive intrapersonal communication. Is this why we all talk to ourselves—we are strangers to ourselves, but we keep trying to remedy the situation, hoping that constant communication will open the door to intimacy? Can talking bring us any closer to getting to know ourselves? Little wonder Malinconico is so lonely—the prison of our own minds is the most solitary place on earth.

Malinconico is far from being the master of his thoughts—they often run away from him—and sometimes he cannot even control the words leaving his mouth, claiming to suffer from a “morphosyntactic impairment, a dysfunction of the structure of my phrasing.” So Malinconico riles against his human condition the only way he knows how, by progressively refusing to tolerate society’s “small-scale atrocities” in lieu of addressing the larger psychological problems he has no chance of besting. Seemingly minor incidents cause his anger to boil over, and instead of turning a blind eye—as we are conditioned to do—he confronts the nimrod who blocks the sidewalk with his motorcycle or the secretary who asks him to turn off his cell phone. It is his little attempt to gain some sense of agency in a world that gives us no control or comprehension.

By the end of the novel, Malinconico realizes, as the title suggests, that he doesn’t understand his own life, yet he also realizes that this fact no longer hurts him. It is the nature of life that we should have difficulty grasping its intentions. As Malinconico puts it, “The thing is that reality mumbles. It expresses itself in incomplete sentences.”