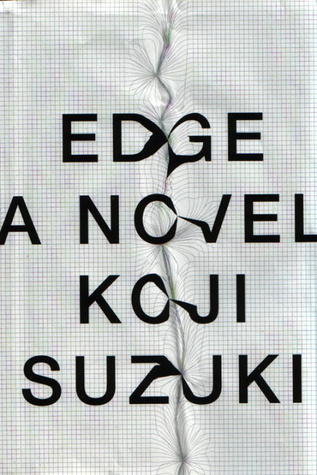 In Edge, Koji Suzuki devises an inspired premise and pummels it half to death. Suzuki has been touted as Japan’s answer to Stephen King. Wrong. Suzuki may be the answer, but King is not the question. Suzuki lacks King’s gift for weaving seamless stories peopled with multidimensional characters. More important, Suzuki dislikes horror, describing himself in a 2005 interview as “the complete opposite of a ‘horror’ sort of person.”

Yet Suzuki made his name with the 1991 horror-mystery Ringu (translated by Robert B. Rohmer and Glynne Walley as Ring [2004], which inspired Hideo Nakata’s sublimely creepy 1998 film as well as innumerable sequels and subsequent variants in diverse media, as delineated by Denis Meikle in The Ring Companion (2005). But Suzuki’s sequels, Rasen (1995; Eng. Spiral, 2005) and Rupu (1998; Eng. Loop, 2006), translated by Glynne Walley, jettisoned the horror trappings of Ringu for those of sf, a development that has continued through Edge.

The novel’s major strength is protagonist Saeko Kuriyama. Never having known her mother, Saeko grew up devoted to her father, Sinochiro. He raised her to be knowledgeable and inquisitive, peppering her with minilectures on topics ranging from ancient mysteries to quantum physics. Then, when she was seventeen, he vanished—a trauma that forever warped her psyche.

Now, thirty-five years old and recently divorced, Saeko remains obsessed by his disappearance, deeply neurotic, and detached from life. In her capacity as a freelance journalist, she is about to be pulled by the irresistible force of proliferating disappearances throughout Japan into a confrontation with no less a mystery than the ontological structure of the universe itself—which, events hint, may be unraveling.

Unlikely as it may sound, the culprit is mathematics. Physicist Naoki Isogai struggles to explain: “Apparently the value of Pi has changed.” Worse, “[t]he Riemann hypothesis has collapsed. . . . It’s a disaster, a nightmare scenario.”

In the hands of a master of hard sf like Greg Egan, so arcane a premise might succeed. In Suzuki’s, it doesn’t. One quickly realizes that the novel’s “science”—incarnated in bits of technobabble like “In scientific terms, what will happen is the instantaneous scattering of all matter at a quantum level. All structure as we know it will be lost”—is wildly wonky.

As in his previous novel, Kamigami No Promenade (2008; Eng. Promenade of the Gods, 2008), Suzuki undermines Edge with awkward prose, inconsistent characterization, and inept metaphors. He is irrepressibly redundant, repeating information as though writing for readers with ADD. Further potholes fill the narrative road: information dumps on a wild range of topics, including Japanese folklore, black holes, plate tectonics, the history of hieroglyphs, the origin of sight and the evolution of the eye, geomagnetism, antimatter, wormholes, sunspots, the demise of the dinosaurs, enough ancient-civilization mysteries to delight Erich von Däniken, and mathematics. Lots of mathematics.

Still, Edge is worth reading for its insights into twenty-first-century Japanese attitudes toward apocalypse. These attitudes contrast strikingly with those in the (far superior) 1973 novel Nippon Chinbotsu, by Komatsu Sakyō (pseud. Minoru Komatsu). This richly nuanced look at Japanese culture and psychology during what, for the nation, is the end of days, is available in English only in a truncated translation by Michael Gallagher (Japan Sinks, 1976). But it was effectively adapted by Shiro Moritan in his elegiac 1973 film, The Submersion of Japan.