The Rule of Barbarism by Abdellatif Laâbi 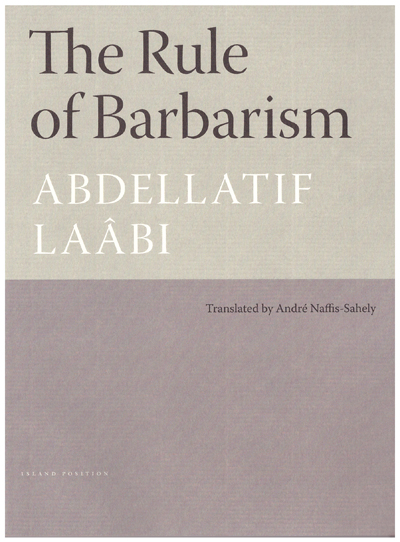 It is unfortunate that Moroccan poet and novelist Abdellatif Laâbi is not better known in the English-speak-ing world. After making his name as a poet and founder of the avant-garde journal Souffles in the 1960s, he was imprisoned and tortured before going into exile in France, where he has continued to write, being honored with the Prix Goncourt de la Poésie in 2009 and the Grand Prix de la Francophonie in 2011.

Fortunately, Laâbi’s debut collection of poetry, Le règne de barbarie (1980), is now available in English, having been deftly rendered into English by André Naffis-Sahely, also the translator of Laâbi’s autobiographical novel, The Bottom of the Jar. The Rule of Barbarism was written between the years of 1965 and 1967 but was only published in 1976, halfway through Laâbi’s eight-year imprisonment. It speaks of another time in the Arab world, a moment shortly after independence with political problems not unlike those that recently sparked the Arab Spring, but when the newness of independence allowed utopian political thought to brim more fully with the promise of a better world.

The collection consists of six poems full of erudite anger flowing through detached images of distress, rebellion, and deracination: “This anger of the invalids is your couscous,” Laâbi writes. Referencing a wide variety of sources from the Western and Arabic traditions, the theme of language takes center stage. “A new unalloyed language” is sought. He promises to speak “of the dead who went before me.” He even ends one of the poems with the verse “I have spoken.”

There is a certain difficulty in copyediting a translation of avant-garde poetry that lacks punctuation, and it shows. Occasionally verses lack necessary prepositions (“I seek my tribe a language that . . .” for “Je cherche à mon tribu un langage que . . .”). A few phrases are inexplicably moved down a line (“of narcotics”). Some translation decisions don’t necessarily match the Moroccan context (“chapelets” as “rosary beads”). But the absence of more thorough copyediting detracts little from the overall accomplishment. Abdellatif Laâbi’s rhythm and flow come through in these incantatory verses of struggle and love for a reimagined land. He may be heeded or ignored, but the prophet-poet has spoken.