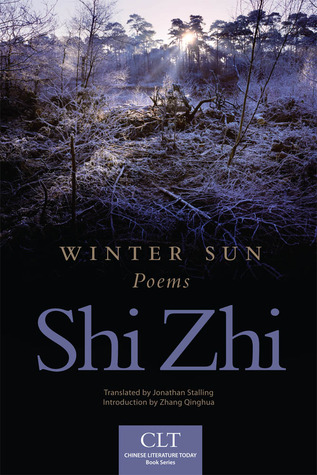 A contemporary of Bei Dao, Mang Ke, and Duo Duo, Shi Zhi (b. 1948) was read and recited by thousands of younger-generation Chinese at the beginning of the Culture Revolution. During the first two decades of the post-Mao era, his poetry sank into obscurity, but it has recently seen something of a revival in the twenty-first century.

Winter Sun is a collection of seventy-six poems selected and written by Shi Zhi between 1965 and 2006. The body of poetry in this collection is sandwiched between Zhang Qinghua’s introduction, “The Return of the Pioneer,” and Shi Zhi’s postscript, “To My American Readers,” along with Jonathan Stalling’s translator’s acknowledgments. Shi Zhi (literally, “index finger”) is the pen name of Guo Lusheng, who chose this name “in response to the unwarranted social pressures distilled into the image of people pointing at his back” with disapproval. A frequent visitor to mental institutions since 1973, and finally a twelve-year sojourner in an insane asylum, Shi Zhi’s poems “have been compounded but never compromised by the complexity of his mental health issues.”

Zhang Qinghua’s introduction serves both as a short biography of Shi Zhi and an evaluation of Shi Zhi’s poetic legacy. Zhang calls Shi Zhi a “true romanticist” and “a great narrator” of China’s recent past. Shi Zhi “grew up and was shaped by a romantic era of radical idealism” in the 1950s and 1960s, “actively inherit[ing] from former generations the psychological qualities of still-earlier romantic poets, and re-establish[ing] the traditional lyrical forms of earlier modern Chinese writing.” Shi Zhi’s tragic self-identification takes the form of furious social criticism that exposes the incurable wounds inflicted by the crimes of a chaotic and tyrannical age.

Shi Zhi’s postscript reviews both historical and psychological conditions of his poetic writing during five periods of his life: the early years of the Cultural Revolution (1965–68), his first sojourn at a mental hospital in 1973, the first dozen or so years after the Cultural Revolution (1976–89), his second and longest stay at an insane asylum (1990–2002), and the period following his release from mental institutions (2002–present).

Jonathan Stalling’s acknowledgments explain the strategies that he has adopted in translating Shi Zhi’s poems into lyrically charged free verse with minimal punctuation. Stalling’s rendition provides readers of English with a window through which to observe Shi Zhi’s unusual life story and spiritual landscapes.

Winter Sun is a long-overdue collection of one of the leading figures in contemporary Chinese poetry. I will close with an excerpt from one of Shi Zhi’s notable poems, “Oh, Nietzsche”: “Through so many sleepless nights he endured the torture of disease / Yet nurtured the poetic longing of solitude and indifference / An infant thought undergoes the trauma of birth / To finally cry out in an earth-shattering voice.”