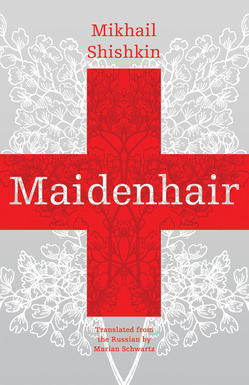 Mikhail Shishkin has been publishing in Russia to acclaim and accolades for almost twenty years. His work is allusive, dense, and strikingly beautiful. He’s a challenge for any translator and a pleasure for the Russian reader. And now, Marian Schwartz’s translation of his novel Venerin volos (2006) finally brings the full complexity of Shishkin’s work to the English-speaking world.

Schwartz’s translation faithfully conveys the structure and intricacies of Shishkin’s novel, providing no more hints or signposts for the English-

language reader than the author allows his native readership. The novel is built from a web of textual sources assembled so seamlessly that the subtlety of connections can, at times, flummox even the conscientious reader. Maidenhair does not explicitly differentiate descriptions of the “real” world from secondhand stories. A detail from the protagonist’s life might appear alongside a line from a book he’s reading, suggesting that each has equal claim to the representation of some kind of reality.

The novel’s protagonist works as an interpreter in the Swiss migration service, where he translates hearings for political asylum seekers. Transcripts of these hearings make their way into the text, alternating with other stories, including the interpreter’s own. In letters to his son, he retraces the dissolution of his marriage to the boy’s mother, which takes them to Rome, where the interpreter searches for the origin of their love and for the elusive origin of the West’s cultural heritage. However, even in Rome, originals are hard to come by. Everything is a copy of something that came before it; everything is a reflection of the stories surrounding it. (This section was translated by Jamie Gambrell and published as “We Can’t Go On Living This Way” in the November 2009 issue of WLT.)

The interpreter’s account is compelling in its own right, but the real drama of Maidenhair comes in the spaces between the novel’s different stories. Aside from the transcripts and the interpreter’s reminiscences, Shishkin includes reimagined ancient Greek histories—which the interpreter reads on his breaks—and the memoirs of a Soviet-era singer whose biography the interpreter is commissioned to write. In each story, Shishkin brilliantly reproduces a distinctive style, placing each story in a recognizable time and place. But once the stories enter Maidenhair, they start to bleed into one other. Images and motifs from the singer’s story appear in the asylum hearings, and refugees from a former Soviet republic run into an ancient Greek army. Themes, images, and even characters echo between discrete storylines in a way that transcends the usual rules of geography and time.

In interviews, Shishkin has said that his novel takes place “everywhere and always.” This speaks to the universality of Shishkin’s themes, but more than that, it suggests that time and place are not the organizing principles of his work. Rather, they are the constraints his novel works to overcome, and other connections—thematic, visual, auditory—are the fibers that bring these disparate stories together into one novel.

This array of connections forms a complex puzzle that can at times be dizzyingly intricate and even baffling. But disentangling Shishkin’s structure is one of the principal pleasures of reading Maidenhair. It is not only aesthetically satisfying but also reveals Shishkin’s unique worldview, which manages to engage Russia’s literary heritage while at the same time creating something new and altogether original.