The Finno-Ugrian Vampire by Noémi Szécsi 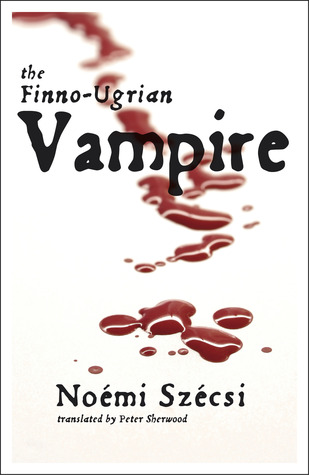 In the first paragraph of this “were-tale for six actors, five voices, two players,” narrator Jerne Voltampere proffers fair warning: “Reader, do not doubt the truth of my words, for the tale I tell is a lie from beginning to end. It is often said that the only way to tell the truth is through telling lies. But in my view reality is wholly devoid of interest. Yet every word of this tale is true.”

Thus begins the most innovative, trenchant vampire tale since Mati Unt’s Doonori meelespea (1990; Eng. Diary of a Blood Donor, 2008). But where Unt used the well-heeled motif of the vampire as a political metaphor for postcommunism in mid-1980s Estonia, Hungarian writer Noémi Szécsi appropriates the trope, which is not an element of Hungarian folklore, as a metaphor for a young person’s coming of age in modern-day Budapest. (In its original Hungarian, Finnugor vámpír [2002], Szécsi exploited the lack of a grammatical gender in the Hungarian language to leave the reader in doubt as to whether Jerne is male or female—a masterstroke inevitably lost in this deft translation by Peter Sherwood.)

Two engines drive this most unconventional bildungsroman: Jerne’s witty, sardonic narrative voice and “Grandma.” Separated by a gap of not merely generations but centuries, the two share a top-floor flat in a modern apartment building. Dead these last two hundred or so years, Grandma is guardian devil to her “trainee vampire.” While Jerne sees her as “a conscientious guardian who left no stone unturned to ensure that I become a well-educated corpse,” Grandma admits that “the essence of the matter is that deep down I’m a sadistic old woman.” She’s not kidding.

In her day job, Jerne reads proof at a two-person publishing house owned by editor in chief Norma-Elektra and her husband, Ármin Jermák, a marginally dysfunctional vampire whom Jerne finds “as repulsive as spinach purée.” But what Jerne really wants to do is to write and publish animal stories for children about “Initiative, the bumptious but cowardly rabbit.” In realizing this goal, Jerne has a problem: being a force of darkness “insensible to goodness,” she is singularly ill-suited by experience or temperament to imbue her stories with suitable moral content. Commenting on Jerne’s first collection, Rotten Animals, Norma-Elektra nails the problem: “These rabbits, foxes, wolves, polecats, moles and gophers—they’re all cynical and evil.” Moreover, having no experience with or liking for her putative audience, Jerne fills her stories with words like “louchely” and “fecund” and sentences like “The fox was orally fixated all afternoon.”

Interesting though Jerne’s story is, it’s her voice—misogynistic, wry, astute, and unfailingly deadpan—that keeps us rapidly turning pages even as we savor every sentence. Her status, initially an outsider to both human and vampire communities, is the perfect vantage point for caustic insights into Hungarian society, gender politics, the airs of artists, literary forms ranging from lyric poetry to romance novels, the aspirations of writers, and the genre, which this novel both enriches and subverts.

As well wrought as works by Jerne’s idols Hans Christian Andersen, Oscar Wilde, and Lewis Carroll, The Finno-Ugrian Vampire belongs at the top of your “must-read” list. For as Jerne reminds us, “vampirism, just like literature, is not something to be denied.”