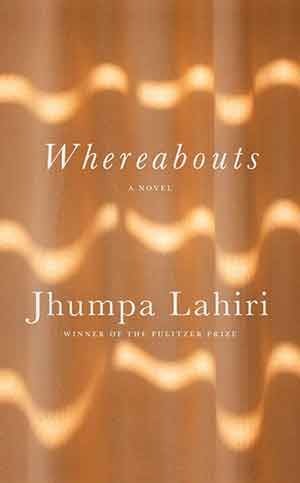 WHEREABOUTS is Jhumpa Lahiri’s first novel written in Italian and translated into English by herself. It is also her first novel since The Lowland in 2014, which she completed in Rome. Whereabouts presents the culmination of her deliberate and complete immersion into a language and culture different from her Indian and American heritage and its impact on her development as a novelist. The result is a novel unlike any she has ever written, which focuses on the inner life of a middle-aged woman, an academic, who inhabits various public and private spaces in an unnamed Italian city.

The novel is structured as vignettes with chapter titles referring to various locations like “In the Bookstore” or “At My House.” Through these vignettes we are offered glimpses of this protagonist’s complex emotional life, her deep loneliness in the city, and her attempts at tenuous connections. The chapter “In the Bookstore” is a chance encounter with her former partner (“the only significant one”), which brings back painful memories of her eagerness to please him and take care of the sundry details of his life, culminating in the shocking revelation of his betrayal. The end of the relationship finally offers her a sense of liberation.

The protagonist’s life is imbued with a pervasive sense of loss. There are painful memories of the sudden death of her father, the trauma from which she and her mother have never healed. The loss of the narrator’s father happens at a time when she and her father were going to a different town to see a play, one of their few shared pleasures. Later in the novel, she visits her mother, who is absorbed in her own numerous physical ailments and does not ask the protagonist any questions about her life but focuses on the loss of an address book and brooch. In contrast to the emotional vacuum in her relationship with her mother, her visit to her father’s crypt is filled with emotional intensity.

Bookended as the novel is against these primal relationships and losses, there are many passing friendships and even attractions in the narrator’s solitary life. She visits friends with young children, lashes out at a younger woman at a dinner party, witnesses an intimate fight played out on the street between her male friend and his wife. It seems at times that she is a voyeur as well as a flâneur in the city, witnessing scenes of intimacy that somehow evade her. In the final sequence she witnesses a group of foreigners on the train who are enjoying one another’s company and simple foods with boisterous abandon. They offer their snacks to the narrator, but she is unable to accept. In a way, she is reminiscent of an aging, albeit female, Prufrock who is unable to accept the possibilities of life and is resigned to liminal presence in the city. Even when she accepts the opportunity of spending a year in a different country, it seems unlikely that her habits of introspection and isolation will change.

Whereabouts is a powerful portrait of a woman, neither young nor having the usual comforts of middle age, but whose inner struggles and external sojourns are still compelling. Lahiri’s prose is sparse and lyrical. The economy of the language and its origin from a foreign tongue complement the intricacy of the novel.