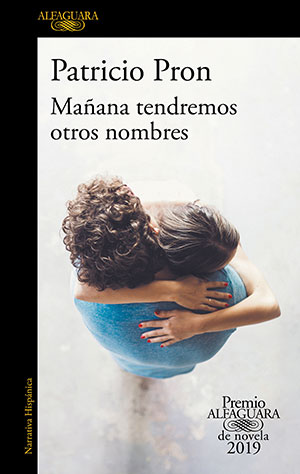 Argentine writer and literary critic Patricio Pron won the prestigious Alfaguara Prize for 2019 with Mañana tendremos otros nombres, a novel that examines relationships between men and women within the context of modern culture. The recipient of various national and international prizes, Pron has authored six collections of short stories and eight novels, and his work has been translated into several languages.

Pron’s experience as an immigrant—he has lived in Madrid since 2008—and his academic preparation—he holds a doctorate in Romance philology from the University of Göttingen—are evidenced in his most recent work. According to the author, Mañana tendremos otros nombres is also based on experiences many of his friends shared with him. The plot is simple and perhaps the least interesting thing about this text: the two protagonists, who are referred to only as “El” and “Ella,” experience a range of emotions they had not anticipated. They observe their friends’ relationships, both hetero- and homosexual ones, and both have affairs with other people before their lives take a surprising turn.

The author also maintains the anonymity of the secondary characters by using the initials of their first names throughout the text. This technique, which universalizes the characters, is somewhat disruptive for readers, who encounter the capitalized pronouns and initials in the middle of sentences throughout the novel. This also has an alienating, distancing effect on the reader, which may have been intended by the author.

The writing and construction of the text is reflected in the professions of the two protagonists: she is an architect and he, a writer and critic of nonfiction. Both endeavors, like their relationship, represent attempts to create and transcend in a context where possibilities to do so are illusory. She struggles to establish herself in a male-dominated field, while he faces the changes that technology has wrought upon popular culture and the publishing industry.

The novel references a broad range of themes, including sexual abuse and changing gender roles, the growing power of social media and the decline of literary culture, the terrorist threat and the precariousness of modern existence, the recent economic crisis and the reaction in Spain to increased immigration. Environmental pollution and the impact of climate change on Madrid are also mentioned. In addition, there is criticism of some aspects of Spanish culture, which may spring from Pron’s experiences living in the country as an immigrant. Finally, the issue of generational differences is presented in this text, which portrays the younger generation as bewildered by the economic and social challenges it faces.

This is a novel of ideas, and Pron is adept at working them into his examination of contemporary society and relationships between couples. Through his anonymous protagonists and secondary characters, Pron’s work presents a kaleidoscopic view of some of the alienating and dehumanizing aspects of modern culture and their impact on us.