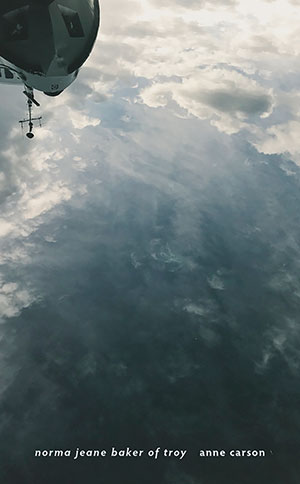 ANNE CARSON'S LATEST published work is brilliantly conceived but untidily written. The idea of a feminist reinterpretation of Euripides’ play Helen that conflates the figures of Helen of Troy and Marilyn Monroe/Norma Jeane Baker in order to take a fresh look at them through modern eyes is in itself intriguing, for both women were well-known beauties who found themselves stranded in the wilderness of a patriarchal culture’s obsessive and at times violent pursuit of women. Both women were also female icons who were the targets of misogynistic censure, Monroe for her giddy eroticism and Helen for her supposedly willing infidelity.

This is a work that assumes knowledge of both Greek mythology and Hollywood lore on a rather massive scale. To appreciate it, you need to know that in Euripides’ play there are two versions of the Helen story, one in which she was exiled in Egypt and another in which she was a phantasm secluded in Troy, which helps to explain Carson’s continual references to Helen as a “cloud.” You also need to know that Marilyn Monroe made movies directed by Fritz Lang, that her circle included the singer Pearl Bailey, and that she was an intimate of Truman Capote, which may explain why she enters and exits some scenes as Capote rather than herself. And to make sense of why Norma Jeane is portrayed as knitting throughout the play, it helps to be grounded in Homer’s Iliad, where the figure of Helen makes her first appearance weaving a tapestry, arguably a metaphor for poetic process.

The language and tone of Carson’s play are strikingly uneven. Although individual lines have Carson’s recognizable poetic force (“Sometimes I think language should cover its eyes when it speaks”), more often the lines declaim in abrupt, flat statements such as “It’s a disaster to be a girl” or “In war, things go wrong. Blame women.” At other times Carson’s language veers toward a gossipy tabloid style, perhaps meant to evoke Capote’s profile of Marilyn Monroe, “A Beautiful Child.”

Finally, the inferential leap that Carson asks us to make in merging Norma Jeane Baker with Helen of Troy is simply too long­—the conflation of the two legendary women is implied but unearned. A more coherent expression of the similarities unifying them might have firmly grounded readers in the force of Carson’s lyrical artistry, which is sadly missing here.