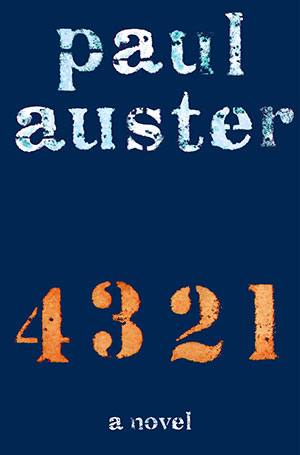 Is it an indulgence to resist the arbitrariness of having only one life to live? Rather than lodge one’s alternative paths in a variety of characters in different plots or give one character impossible dreams, why not set up several roads—all taken—for the same character?

Something like that thinking seems to have motivated Paul Auster to depart from his usual minimalistic and highly controlled style in this mammoth novel of the several lives of one Archibald Isaac Ferguson. Born in 1947 in Newark to Jewish parents, attending almost the same schools, a lover of New York City, and, in three cases, in the process of becoming a published writer, the Archie Fergusons grow up, chronologically and sequentially in subchapters (3.1, 3.2, 3.3, 3.4, 4.1, etc.) during the quiet and then tumultuous 1950s and ’60s.

Readers may choose to tolerate or take notes in coping with the initial confusions as one segmented Archie story gives way to another for the same time period. Different friends and experiences help separate the stories, differences that become more distinct after high school.

As opposed to his usual practice, Auster chose a third-person approach to each Archie, the narrative voice often verging into analytical omniscience. The voice comments on character and supplies historical details, sometimes so abundant as to constitute separate narratives, particularly for the protests and violence of the sixties. Archie is marginally involved through friends, lovers, and—in one plot—as a college reporter.

One is led to the inevitable question about realistic novels firmly lodged in particular periods: Are the characters’ lives and the web of details attached to them described interestingly enough? Is there enough interest in the character to tunnel through context that may not be so interesting? I read on and sometimes “through,” the pulse of Ferguson’s lives sustaining me more than suspense points or large conflicts. I feel less qualified to judge the attraction of the detailed historical events for those who did not live through those heady midcentury years. The most interesting parts of the lives, for me, were the apprenticeships and fictions spun out of the three writer embodiments. Much of Auster seems committed to those accounts.

While some already hail this novel as a masterpiece, one is reminded that length alone does not an epic make. The book is certainly a saga, reminiscent of Richard Powers’s wonderful The Time of Our Singing or Saul Bellow’s The Adventures of Augie March or even the late Victorian novels of families in a time of change. Whatever its posterity, 4 3 2 1 is certainly an impressive achievement.