Sometimes i’m called an “activist-poet,” maybe to make my aesthetically odd poetry seem more relevant or marketable to audiences other than poets. i’ve gotten to dislike the term “activist-poet,” especially the hyphen. Mostly i’m not active & feel passive dread, bringing pagan practices outside, talking to insects & plants during the minutes etc. My practicism occurs too rarely, but basically i can’t stand 95 percent of what is going on about anything.

On Friday of National Pollinator Week, it is suggested that we take letters to our local Kroger Market for a campaign against pesticides. Kroger uses deadly pesticides in their brand. Had signed up to drop off a letter to the manager of Kroger. i’ve never heard of Kroger before this; i’m from Berkeley. i drive to the nearest Kroger; my friend Jane comes along for support: she is a great calm beautiful woman. The area around the store is being gentrified & is getting whiter. We’re supposed to hand letters to the managers directly.

A large percent of insect species

Will go extinct by the end of the century. i’d like to become a bee when i’m nonhuman (“b will be a bee”). My letter says Kroger’s brand contains glyphosates, organophosphates & neonicotinoids. i go into the market; the security guard looks bored but the energy over her is silver. She has long brushlike eyelashes, even maybe ½ an inch long. She points to the cashier. Endangered things in Kroger on the shelves include

Apples, sardines, plastic purple beach balls. The humans are in danger. There is Roundup. It is National Pollinator Week. The cashier calls the manager for me. He comes out. i am the only white person in Kroger. i feel shame for having come here. White person from Berkeley telling N, a worker of color not in my neighborhood, what he shouldn’t have on his shelves because the bees are dying. Profit systems are full of

N, the manager, is friendly & not tired. i experience the energy over him as vital golden flecks of winged things that could enter his circle without danger. i am a teacher, i explain; i want humans to go on living. Can’t Kroger do something i say & hand him the letter. He looks at me with mild pity.
Energy wings ^^>><< while we are talking. They never listen to us, he says. He says, Call national Kroger

& tell them what you told me. i start to say, Kroger is committing economic terror on the people of your city. The cereal & even the beans have horrible poisons. Buzzing of moral confusion, i am a white person coming into a store not in my town to hand the letter. The young cashier waits while this is happening, all this. She is as patient as Mary in a painting. i say to N, can you just take my letter? He takes it. Both

Of us know they never listen to us.

To learn more about this, visit BeeAction.org, is what my letter says. Capitalism will last longer than the bees; i saw a dead bee near our hive. Sometimes i feel terrible after “activism” but sometimes not, depends on what gets folded in. Whether or not i feel terrible is irrelevant, but folding in the Why feeling even a tiny bit less terrible seems to be part of it. 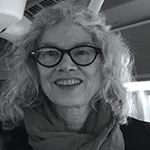 Brenda Hillman has published ten collections with Wesleyan University Press, including Extra Seasonal Works with Letters on Fire (2013) and Extra Hidden Life, among the Days (2019). Hillman is a Chancellor of the Academy of American Poets and Olivia Filippi Professor of Poetry at Saint Mary’s College of California.