We Shall Endure: A Poem

It was snowing in the Southwest, and the wind was cold and harsh the past few days.

We know better than to think it’ll be like this forever. No way.

Again, we know better than to feel it’ll be like this always.

Then the Gallup police shot and killed Larry Casuse.

As a UNM student leader, Casuse encouraged others to be active on behalf of Indigenous matters and peoples.

When Emmett Garcia was named to the Board of Regents for UNM, Casuse called him a “false person.”

Garcia owned Navajo Inn, a bar of the worst sort where Navajos and others were trapped by alcohol sales and use. Due to its location on a main road to and from the reservation, many fatalities and injuries took place there.

Garcia was presently the mayor of Gallup, a border town. At the same time, Garcia was also the head of the Gallup–McKinley County Alcohol Rehabilitation Program.

One hand feeding the other hand. Busy. Profiting. Busy, yes.

Those were only two of the reasons why Casuse opposed Garcia as a UNM Board of Regents member.

There was also the reason why Indigenous Peoples opposed the Gallup Indian Ceremonial that took place annually. Profiting.

The Gallup Independent, a local newspaper, reported Casuse abducted Garcia in order to march him around the state.

To educate him. Would Garcia have learned anything?

With a small firearm, Casuse and Bob Nakaidinae forced him

to march with them down a street to a sporting goods store.

Police had been alerted. Larry and Bob waited. And waited.

After police arrived, they ordered Casuse and Bob to come out. After they unclothed themselves, they began to exit. Bob was first and he was arrested. When Casuse exited, police began shooting and shooting. Casuse was killed. Very dead.

I am an alcoholic, a non-using alcoholic since I stopped drinking in the winter of 1994. So I know the devastation of it.

I know too the death of it, and I am able to say I didn’t die.
Or go crazy or end up in jail forever. I am alive. Alive for real.

We have to resist, no matter what. To stop fighting wrong
is death. We have to live in order to live. To live is to matter.

Resistance is necessary when we decide to make a stand.
To make a stand for life is to live in order to live. To not die.

When young Indigenous leader Casuse opposed Garcia,
he was making a stand for the lives of Indigenous peoples.

To resist by making a stand for life cost Casuse his own life.
Unfortunate for society and police carrying out NM’s wrath.

Resistance is necessary to correct what’s wrong. Believe me.
We must live in order to live. It matters to live. And to die.

Marching: Being There Alive

Three weeks after Casuse was killed, a memorial march was held in Gallup, billed as ongoing support for Wounded Knee.

The 1973 occupation of Wounded Knee, South Dakota, site of a massacre in 1873 where hundreds of Lakota—women, men, children—were killed by U.S. cavalry, was going on.

To show our courage by having dignity. To act with dignity.

The People cheered and shouted for Toledo’s good words.

“We must act as who we are, human persons. Don’t let anyone provoke you to violence. We are strong People.”

A telegraph from Wounded Knee was read. From the sisters and brothers who were there. “We are remembering our brother Casuse. We are fighting for the same things he fought for and gave his life for.”

There were cheers and shouts for the message of support.

One of our other march leaders spoke. “We are here for all humanity, for that purpose. We are here to let Gallup know, to let New Mexico know.” To remember Casuse our brother, to not let his effort and passing be in vain.

There was a huge swell and surge of applauding—hollering, piercing whistling, cheering—from our growing numbers of peoples—black, white, mixed, all races of peoples in the Americas and beyond—and countless Indigenous tribal peoples and communities on the march. We must live in order to live.

We must live and decide for ourselves what our lives are to be. Each year, each day, each minute of our time on Earth matters.

We must be sure of what we are doing as we live.

We must be certain of what kind of life we are to live within.

We must be sure to value the past, present, and the future.

We must respect, honor, and help others always and always.

We must believe in love because without love nothing is possible.

Must is a word that has to do with responsibility, obligation, humility, simplicity, gratitude, integrity.

Must is also a word having to do with respect, honesty, fairness, equality, and reliability.

And must also means: we must allow ourselves to live life. 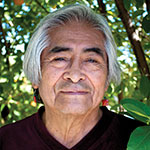 Poet, fiction, and creative nonfiction writer Simon J. Ortiz (Acoma Pueblo) is a retired Regents Professor at Arizona State University and editor emeritus of Red Ink journal. He is determined to express an Indigenous voice that he believes is the essence of present-day reality, conscience, culture, and sense of responsibility.