From Our Land to Our Land

I’m just a human being trying to make it in a world that is rapidly losing its understanding of being human.—John Trudell

A week after the national elections in November 2016, a muscle-bound tattooed white man stood outside a large room at San Bernardino Valley College in California, berating the mostly brown-skinned students trying to get inside. He lashed out about how they don’t belong, they’re criminals and job stealers, you know, the corrosive anti-Mexican rants that have increased in number since President Trump’s 2016 campaign.

The college invited Xicanx spoken-word artist Matt Sedillo and me to speak and read poems. A few people wanted to chase off the dude. Security had already been called. I said I’d prefer for him to come in and listen. If he still wanted to rant, we’d handle it. Sure enough, he found a seat among the standing-room-only in attendance, about four hundred people.

I told the group that even though I’m of Mexican descent I’m no immigrant. My mother had roots with the Tarahumara people from the state of Chihuahua, Mexico, also known as the Rarámuri. This tribe is associated linguistically, and in other ways, to the Hopi, Shoshone, Paiute, Tohono O’odham, and Pueblo, all the way down to the Mexica of central Mexico, the Pipil of El Salvador, and Nahuatl-speaking tribes in Nicaragua. In fact, they have ties in many ways with tribes throughout the hemisphere. The Rarámuri are also linked to the so-called Mogollon peoples of prehistoric times.

Just before I was born, my mother crossed an international bridge from Ciudad Juárez, Chihuahua, Mexico, to El Paso, Texas. The year was 1954. I’m an “anchor baby”—and so what. Migrants from Europe included many pregnant women lining up at Ellis Island, some ready to burst—350 babies born there in its fifty-year history. They knew, because of law, that a US-born child helped their residency claims and later citizenship. Criminalizing or demeaning anyone for this is ridiculous and inhumane.

More notably, the Chihuahua desert cuts a large swath through the US Southwest and northern Mexico. The Rarámuri have resided in the Chihuahua desert for at least eight thousand years of the desert’s existence—way before the Spanish, Portuguese, English, or French, before borders, before “legal” documents. El Paso is within the confines of this desert, which intersects two nations and several states. When my mother gave birth to me across the border, we went from our land to our land.

When my mother gave birth to me across the border, we went from our land to our land.

During our reading and talk, the white dude who had been heckling students on the way in didn’t say a word. Slowly, and quietly, he left the room.

My trajectories have been primarily in the United States but also across countries, beyond seas, through many languages. In spirit, I’m borderless. Nonetheless, I acknowledge the fabricated reality of passports, borders, race, and social classes. I’ve lived in particular areas of this earth, including where my immediate ancestors have long strode, abiding by natural law but also man-made law, some of which align with nature, most of which don’t.

Wherever the earth accepts my footsteps, welcoming my blood, my tears, my presence, as it does anyone regardless of skin color, sexual orientation, gender, or personal and societal traumas. This is Mother Earth after all. While we may each have our own particular mothers, she’s mother to everyone. I’m not talking about the fatherland, the patria, where the word “patriot” comes from, of nationhood that men created to bring together those with shared history, language, economy, and culture for home markets, governance, and identity.

Nations exist everywhere. Those who insist that nations are holy or sacred are extolling something conceived through history, politics, and war—nothing holy about any of this. Just the same, nations are unraveling in the face of global capitalism, war, poverty, forced migrations, climate change, and other factors, both detrimental as well as healthy.

It’s time to get back to our Mother.

I’m talking about the ecosystem of this blue, green, and cloud-speckled planet that photographs from space have revealed to be singular, without country or state lines, unlike many school maps, without areas designated for certain religions or ethnicities. In some religious views, the way God would see us. In fact, this system includes Father Sky—with sunlight, air, and rain. All this reminds us we are one species, related to all life, varied as any species can be, but still home on one planet that no person, groups of persons, corporations, or countries should own or control, even if rulers have tried to do so across history.

Unfortunately, with all this jockeying for land, ownership, and power, most people sense an end to belonging. Millions have been driven out from land but also from their story and ancestral knowledge. Uprooted migrants around the world have struggled to be welcomed, to feel they have a place to rest and rise. As Mexican migrants say, ni de aquí, ni de allá—neither from here nor from there.

Today there is a widespread craving to belong.

Most US commentators, particularly in the media but also in government, have no clue what Mexicans are—especially who Xicanx are, the more conscious, Native-rooted, politically radical among them. We’re called “Hispanics,” “foreigners,” “aliens,” or “illegals.” But few recognize our myriad heritages, in particular those that go back ages on this land. This is also not just about having “papers.” One’s humanity cannot be determined by documents. And even with documents, far too many end up as second-class citizens anyway. Papers don’t guarantee anything. It’s about full and total recognition and dignity as human birthright.

I understand that to be Native American is to be acknowledged as such by an established First Nation. That’s important—for established Native nations this is about sovereignty. Xicanx, after five hundred years of historical trauma, are a people remade to increasingly embody colonial identities. While I don’t have direct ties to my Native roots, I’ve reached back to all of them. Still, what makes me indigenous has more to do with calling on the ancestors, protecting land, water, and planet, and practicing ways that connect me to nature and spirit.

I’m Native because I follow Native ways. I study the Mexica / Rarámuri / Diné as much I can, including language, rituals, and worldviews. But being Xicanx is as “tribal” as I can get. Even though I use the word tribe here and there, it’s not what Natives called themselves—in their languages, the names for themselves mostly mean “the people” or “human beings.” I also don’t seek government recognition. Mother Earth’s unconditional embrace is the only recognition I need—she recognizes me, and all peoples, every day I walk, breathe, dance. I’m Native in how I think and live, as a truth-bound human being carrying and contributing my medicine through art, writing, speaking, healing, and organizing.

As I write this, tens of thousands of refugees, many women and children, mostly from El Salvador, Guatemala, and Honduras, are being detained in concentration camps, under horrendous conditions, even leading to deaths. They are not just brown-skinned “Hispanics,” which means they have Native and/or African roots. There are First Peoples among them—from Mayans in Guatemala or Honduras, Pibiles in El Salvador, Mixtecos / Zapotecos / Mayans from southern Mexico, many of whom still speak their original tongues. Even if the majority don’t know their Native ancestry, they carry this on their faces, their eyes, their skins.

Trump targeted these people, from the beginning of his campaign till today, as criminals, rapists, even “animals.” Even calling them “illegals” is incorrect—most of them have made it clear for months ahead of their hellish journeys that they are seeking asylum, which is legal under US and international laws.

By creating barrier after barrier to such asylum, it’s the US that is committing illegal acts.

Again, how can people who have roots as deep as anyone on this land be considered strangers? It’s racism plain and simple (although racism is hardly ever just plain and simple). As in history past, racists and other liars have turned everything on its head where now the brown-skinned, mostly indigenous peoples of the land don’t belong!

Borders and beliefs—two human-created obsessions—for centuries have driven policies and are behind most wars, conquests, and oppressions.

Borders and beliefs—two human-created obsessions—for centuries have driven policies and are behind most wars, conquests, and oppressions. Time to get back to nature, to our mother, to our connections and relations, to what originally gave us life and therefore this truth: We belong because we belong, and no human being can end or limit this.

Mother Earth, Father Sky, and everything in between is common and necessary to all of us and should never be owned or controlled by anyone or anything. 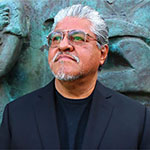