If Not Today, Then Maybe Tomorrow

Anger is a tool, and like a hammer, it can build a house or tear one down. Sometimes you need it to do both.

Marching down Michigan Avenue, the crowd blocked traffic. We chanted, “Slay the AMA!” and “Fight Back! Fight AIDS!” shocking shoppers and startling tourists.

It was 1992, and the American Medical Association (ama) proposed instituting mandatory HIV testing for all patients regardless of why they sought medical care. Their conference took place in Chicago, and the local chapter of the AIDS Coalition to Unleash Power (act-up) organized a demonstration. My group, ACT-UP/KC, went to support our Midwest activist brothers and sisters.

Police on horseback herded us to barricades and blocked access to the convention hotel, but our chants interrupted panels and caused appalled conference attendees to look out the ballroom windows.

Police moved on the crowd, causing us to lumber and stumble. I fell to the sidewalk and quickly crawled away from the stampede.

I found myself on the other side of the police barricade and directly in front of the main hotel entrance. I made it further than anyone else. I rushed to the hotel’s revolving door, slid into an opening, and pushed with all my rage.

From inside the hotel, faces looked at me with fear. Had I come to infect them? A policeman’s hand pulled me back through the revolving door opening and cast me onto the sidewalk. Cameras flashed. The media focused on me. Back in Kansas City, my cancer-ridden mother watched police arrest her twenty-four-year-old son on live TV.

On the ground, I continued chanting, “Arrest the real criminals!” The policeman’s knee pressed into my brown back, cuffs tightened.

My mind flashed to my mother’s St. Michael statue on her altar. With powerful wings outstretched, sword in hand, he stood atop a demon. There with my face pressed into the sidewalk, I realized that to the world I am not St. Michael fighting for justice—I am and always have been his demon.

I realized that to the world I am not St. Michael fighting for justice—I am and always have been his demon.

At the police station, I stared at fresh drops of blood on the elevator floor. I didn’t dare to look into the eyes of the policemen who caused them. When the elevator doors opened, I followed the droplets. The bloody trail led to the booking room. I saw another protester. He’d been one of the first arrested. Now he stood bent over, bloodied and sobbing.

Smug faces laughed as they fingerprinted and processed us. That’s the part of activism they don’t tell you about, being arrested, brutalized, a victim of law enforcement inside their walls.

ACT-UP demos were always last resorts. Our people would spend weeks and months trying to negotiate around a demonstration. We wanted to help decision-makers do the right thing. It’s only when they refused and ignored our voices that we activated our people.

Protests and boycotts and arrests were never the goal. The goal was to save lives, and it could have been done so much more easily if they worked with us rather than against us. ACT-UP was full of strategic thinkers. We’d evaluate every possible path that could open up; we’d try to figure out how each of those paths would get us to where we needed to be in order to save lives. We’d have internal discussions, often heated, about taking public action. We’d spend hours writing, calling, pleading, and begging before it came down to a public action. Then, when we were forced to, we’d crack open hell.

So why am I telling you a story that’s twenty-seven years old, older than some of you reading this? Because we are a budget cut away from returning to those days. I’ll remind you that fear and ignorance about HIV led to people who were suspected of having AIDS having their homes burned down. Run out of town or worse.

Fear and ignorance about HIV led to people who were suspected of having AIDS having their homes burned down. Run out of town or worse.

Therefore as an elder, as a survivor, in this time of action, here’s what I need to pass on to you.

The most important thing I learned about activism was not to be afraid of my own anger and rage. As children, we’re taught to hide those feelings, deny them. But anger is a tool, and like a hammer, it can build a house or tear one down. Sometimes you need it to do both.

Sometimes it means protesting and exhausting that energy in a positive way. Other times it means digging into our rage to discover why we’re so angry, so we deny others the ability to trigger it whenever they choose.

When we remove our ego from the anger, it becomes malleable. We can bend that energy into something good.

When we allow the ego to be part of our anger, it’s a rock on our chest, and the more we struggle against it, the heavier it is to move. When we remove our ego from the anger, it becomes malleable. We can bend that energy into something good. We can tap into that energy when we feel depleted. We can also share that energy with others.

I used to fight every battle that presented itself. I lost some and won some, but for me the purpose was not to be silent. As I grew older, I realized some people would keep quiet and simply wait for me to do the fighting. That way, the issue would be addressed and they could benefit from the win or distance themselves from the loss. That upset me, but I still kept fighting. Soon I understood that some of those people didn’t know how to push back.

Each time I took on a fight it gave me experience and taught me lessons in leadership. Activism is a hell of an instructor. So now when I get the urge to fight and push back, I have to think to myself, If I take the lead on this, am I taking away an opportunity from someone else? If in my younger days an elder took the lead on every fight, I couldn’t have become the activist I am today. So, I make room, pull up.

I want to say to those attending rallies and meetings after a long day; to those who give their weekends to march, to be in public, to be on camera; to those who write, call, and visit elected officials, it’s intimidating—all of this is intimidating—but you’re doing it.

To those who speak out in everyday places like on the bus or in a grocery store for marginalized folx, for kids in cages, for black trans women, for health care (including reproductive rights and elder care), for any kindness or caring, for the environment, to protect the water, to defend immigrants, thank you.

I especially thank you if doing this is not your nature or if, for whatever reason, you can’t do these things, but you’re doing something, anything—donating money for protest signs, sending a pizza to a planning meeting, boosting social media posts, coding for the cause, all of it. Thank you.

To those new to the resistance, to those activists coming out of retirement, to those who’ve been on the front lines for years, thank you. Thank you all for your voices, for putting your bodies in the streets, for chanting until you’re hoarse, for taking time off work, for spending a few extra dollars in support, for being a connection. 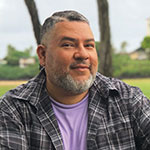 Miguel M. Morales grew up working as a migrant/seasonal farmworker. He is a Lambda Literary Fellow and an alum of the VONA Voices and Macondo Writers Workshops. He is co-editor of Pulse/Pulso: In Remembrance of Orlando and the forthcoming Fat & Queer anthology.