Soon the tanks will appear with their innocent dusty colors
Soon the airplanes will court like doves
Soon
flint will ascend the throne
and daggers will advance assured of their acquittal
Soon
the serpent will relinquish its role
and the beasts of the wild will leave
our flesh to the machines
Soon
everything will end
and the rubble will announce freedom for fangs
and conspiracies will smooth their way to blood
Soon
poems will flee for their lives from the ink
before the pavement’s shadow
and marble will plunge its sword into the spirit
. . .
The night appears like some eternal mourning
for what the metal has in store for these creatures
The sun seems like an eye that cannot sleep
while the elements lie in mountain folds
ready to devastate the calm
and the racing visions in the merriment of butterflies
where the murderers cross the streets
unabashed by the fall of their masks

Rise then, O woman
Maybe it is time to dry your flowers
and clear the atmosphere of the birds and their essence
for the heart seems to shrivel up
and your eyes will not be wide enough to take in those killed
Don’t run like a wild desert
in the horses’ imagination
or like a confident woman in the arms of a lover
whose windows are lit with passion
Don’t run now
Be gentle with your willow branches
trimmed for weddings
and confused with his amputated arms
Don’t stand in front of the window displays
looking at your image
Don’t ask for two flowers from the flower seller
Don’t confidently tease the fields with your breasts
or your eyes in the presence of vision
Don’t let your hair down more than you should
or become too sweet amid the amazement
of streets still shaking
from passing armies
And don’t be liberal with your questions
like a child with curious eyes
or those killed in search of innocence
as the blade glides on

So pass like a palm tree
or a late olive tree

There’s a forest at the corner
a desert in the public square
snow atop the dome of parliament
a cave at home
a hole in the head
to reassure bullets and generals’ laughter
There’s a horizon nibbled by mice
and cold pale moons
a sea chewed by submarines
with towers diminishing its blue solemnity
a river asking direction from a floating corpse
that misdirects it
and an eagle begging its final prey
to fly with him
before zoos take over
Metal invaders gather under the windows
to trap the dawn
Tyrants ambush dreams
in the heart of the lyre
and incite unborn children to kill their mothers
Everything has been perfectly arranged
so that you can easily reach the promenade
and watch a child being raped
from the window of your car
or from atop a policeman’s shoulders
and for those who reserved their seats
two wars ago
everything has been arranged:
the secret pathways for the killer
the mass graves for the victims
where humans fall naked into darkness
stripped of the simplicity of their names
Everything has been arranged to strike down the earth
and pluck its feathers
and the cockerels’ obstinacy
Everything has been arranged
to roll its oaks
towards the frail legumes
and ride its horses
into the bleating kingdoms
and transform shelters into coal mines

Hey sir,
kind sir
who collapsed under the kindness of your heart!
Hey sir,
The bullet whispers . . .
Fire me
Hey sir,
kind sir
who is burdened by children’s rejection across the oceans
fire me
Hey sir,
kind sir
with your spaceships
and high thrones
on the backs of the bombers
Hey sir
who is unsheathed like the shields of liberty
and volcanoes
Fire me in the wind of the sweetness
that streams from what they call innocence
and bestow on me the secret of incarnation
to gather the corpses that have no mercy
on the paving stones
with their night wailing
Hey sir,
kind sir
pierced by rejection
wrapped in the threads of apprehension
I am the bomb
Fire me
to spell out their destruction and the dryness of their villages
to raise it anew into
a white space that doesn’t scratch the range
Fire me
to stitch the swans for you
with the threads of faraway shores
those forlorn shores
under pretense of hunger and prisons
Hey sir,
Kind sir
afflicted by some cosmic wisdom
your heart breaking over the wretchedness of clay
Fire me
at a crazy noon in the obscurity of their forests
and the dullness of their deserts
Fire me . . . O sir
to wrap their mornings
and the night dew on their children’s faces
who sleep on the rooftops
with the smoke of your explosives
Fire me so I can shake their structures
and the bosoms of their horselike young women
causing them to fall down panting
Fire me into the obscenity of their wombs
and their blue secrets
that imitate the sky of your white houses in the capitals
Fire me
and bestow upon my splinters
their everlasting dream
of watching their windows fly
and their flesh clinging to the walls of the horizon
Fire me
before my gunpowder turns white!

I reflect upon the loneliness in the room
and the dark moth under the door
and between the window cracks
I reflect upon the writing table
where my poems turn old, burdened by hallucinations
I reflect upon a book open onto the ends of the street
and on human words
that cross the streets without legs
in search of the voice of a dream
I contemplate their limbs in rivers of ink
and their heart, kneaded
with the daring eyes of the killed
I contemplate your absent face in the mirror
and gather what hair you left
between the teeth of the comb in the morning
and scream out in longing for your waist
with all my hungry desert:
Don’t come now . . .
Don’t come now . . .
What need could I have for another dead person?
What need could I have in this cold?
What need could I have for a gazelle that will not reach the bend?
What need could I have for breathless air
Before the conversation starts?
What need could I have for a hand that has turned ashen
before it reaches my hair
And arms extinguished before the rubble is swept away?
What need could I have for more prisoners of war
in this adversity
or more shadows in this darkness?
Don’t come now
Don’t come now
. . .
I arrange darkness neatly, like a bat
and my labyrinths with the wisdom of the mole
I convince the ceiling that it is no longer raised
And cunningly ask the wall:
Where are your brothers?
And whisper to the door:
Are you awaiting someone in this bareness?
I tell the window
What sort of miracle can raise you
in the air without a frame?
I let loose the conspiracy of the killed
in the cold surroundings
and laugh amid the quarrels of the inanimate
The window will become distant
and the wall will lean down
The door will cry over its isolation
and the ceiling will find an abyss beneath it
called a human being
and fear
And I will laugh like someone killed
by a late bullet
passing through cold flesh
and I will go out
in this manner
filled with loneliness
like a crazed bridge over a desert
in order to cry out one more time:
Don’t come now
Don’t come now 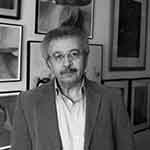 Writer, artist, and photographer Ibrahim Nasrallah was born in 1954 to Palestinian parents who were uprooted from their land in 1948. The author of fourteen poetry collections and twenty-two novels, his epic series of novels, The Palestinian Comedy, covers 250 years of modern Palestinian history. His novel Prairies of Fever was listed by the Guardian as one of the ten most important novels written about the Arab world. Among many other prizes for his work, in 2012 he won the inaugural Jerusalem Award for Culture and Creativity for his literary work. 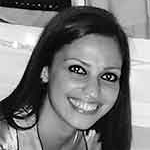 Omnia Amin earned her PhD in modern and contemporary English literature from Queen Mary University of London. She is an author, translator, and professor at the College of Humanities and Social Sciences at Zayed University in Dubai, UAE.