No One Looks at Their Back in the Mirror

A trip to the doctor leaves an unnecessary burden on a young girl.

I inherited the dark skin of the slim body I inhabit from my mother. Together with worry kneaded with constant fear. I inherited my father’s thick and curly hair and his zeal for life. I was caught between these two opposites; a fear of and a zeal for life, charging and withdrawing. Like a tightrope walker trying to maintain balance.

I hadn’t known before that day that tiny hairs slept on my dark back. No one looks at their back in the mirror. Not when they are only seven. That day’s memory remained lodged inside my skin like a thorn I couldn’t remove, so it grew to cover it.

I remember my body being naked except for my underpants as I lay down on a cold bed. It was covered with a gray sheet the nurse would change with every patient. Its pale color occupied me. Perhaps because it contrasted with my loose white underpants with their colorful figures of butterflies or the shapes they wanted to turn into. I could see myself hovering over everyone outside that dark body. I hovered like a butterfly. I saw myself looking at my own body, and my other I held inside it. My mother, the nurse, and I were all waiting for the doctor.

My mother stood to the left of the bed with her back bent under the weight on her shoulders. It resembled a question mark with its bends. Everything around me was white, except my mother’s face. It put on a soft and sweet walnut tone. The nurse on my right appeared relaxed. Her back straight as a ruler. Her white, round face looked like a truckle of fresh cheese. The blueness of her eyes pure and flowing water.

I had already stayed at that hospital for a week once before. I had a high fever and was hallucinating for a whole week. My lips were dry and chapped, with pain seeming to settle in them without ever leaving. I felt as if my blood was boiling with its angry waves shaking my body and exhausting it. I remember that night when my mother’s eyes were filled with fear. They got so big her entire face became two eyes. She said that my temperature exceeded 104. The nurse rushed me to a basin full of cold water where they kept me. I vividly remember the moment when they put me in it. Like hot iron submerged in water. Why didn’t they give me meds to lower my temperature? Had pharmaceutical companies not invented them yet in the 1980s? Or maybe they didn’t work? Was I too young to take them? But it seems that my slim body was tougher than I had thought. The stone passed out of my body without surgery.

My mother used to take me once a year to the hospital for tests, and we would go back to our town the same day. The hospital was twenty tiny towns and some fields away. My mother and I would take two buses to get there. I would measure the time it took by looking at the clock’s arm. Its short, heavy steps made two full circles for us to arrive.

The hospital was twenty tiny towns and some fields away.

I sat there listening to my mother’s words stumbling in her nonnative language as she prolonged the conversation with the nurse. She jumped swiftly from one subject to another, as if afraid of any silent breaks. That foreign tongue had not settled yet on my own tongue comfortably. I knew some of its sentences. Later on, when I was able to master it, my relationship with it would be complicated at best. As if a sieve with thick and old mesh stood between us. Many a detail was lost or got stuck because of its weighty meaning.

The nurse smiled a lot. She praised my long hair and braid. My mother smiled when she heard that. She was at pains to straighten my hair to make it smooth like all those blond girls.

After quite a wait the doctor arrived. His skin was as white as his coat. Like all or most doctors I’d encountered, he was in a rush. He examined my head, belly, and legs. I felt like a tomato being examined by a customer in a hurry. Or a doll in the hands of a bored child. He asked me to sit up so he could examine my back. He slowed down and passed his hand over it and muttered something in that language I didn’t understand. The sieve stood between it and me. He said he’d be back right away. I felt a cold draft from the door he left ajar. I had goosebumps.

He came back with another doctor, and they both stood next to me. They examined my back again. Eight eyes were looking at my back. I couldn’t see it, even as I was outside of it, because their heads were covering it. Both doctors laughed and muttered something I couldn’t understand. I looked at my mother. Her face was pale. Its two nervous lips put on an embarrassed smile. The kind nurse’s smile was faded in a face that had turned red. I didn’t understand what was going on, but I realized something was off. My other I was still hovering over everyone as the two doctors looked at my back. They left, but the echo of their laughter stayed behind in the room. My mother helped me put my clothes on. We walked to the bus stop. She clutched my hand tightly, as if fearing I would run away. It was a very hot afternoon. We walked in the shade of the tall buildings. Silence was our companion until we got to the bus stop.

We got on the bus to return to our town. Looking through the window at what appeared to be a smudged world outside, I asked my mother: “What did the doctor say?”

My tiny bottom occupied the front half of the seat. I moved my legs haphazardly to fill the empty space between my question and her answer. I rested the weight of my head against the glass window and waited for her answer without looking at her. She remained silent as if her tongue lost its way inside her mouth. I felt my entire body becoming one giant ear positioned to capture every breath and detail in her answer. I heard her take all the air around us into her lungs for one lengthy sigh.

She fell silent as if she didn’t want to convey the rest. I felt my ear getting even bigger because it couldn’t comprehend what my mother had just said.

She used to say that when her heart was overcome with anger. I knew that he’d said something awful. I said in a faint voice what I don’t think she heard: “I’m not hairy.”

Then she bit her lips and fell silent. As if holding and hiding a pain she didn’t want me to see. Maybe she felt crushed because she remained silent and never said a word after he brought another doctor to look at my back and said I looked like a monkey.

Sadness bit me like a wolf, and I felt it take a piece out of my little heart. My tongue was numb. I could hear the two doctors still laughing and looking at my back. I didn’t say anything. My mother and I stayed silent the entire trip. We didn’t look at each other and kept looking at the smudged world through the window.

When I got home, I went to my parents’ room right away and opened one of the doors of the big armoire. There was a huge mirror on the inside of its door. I asked my brother to bring the small mirror from the bathroom and hold it up so I could see the back of the monkey I had unknowingly been. The hair was soft and barely visible. My brother said the women the doctor knew had milky white, hairless skin. I looked at my dark back. It was the first time. No one looks at their back in the mirror. Not when they are seven. My back felt heavy. I’ve been carrying it since that day. Leaning on the back of the monkey I was without knowing. 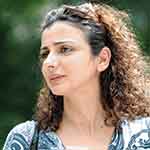 Ibtisam Azem is a Palestinian short-story writer, novelist, and journalist. Her second novel, The Book of Disappearance (Sifr al-Ikhtifa), was translated into English by Sinan Antoon and published by Syracuse University Press in 2019. She lives in New York City. 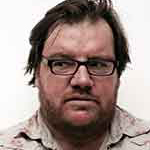 Sinan Antoon is a writer, scholar, and translator. His most recent work is The Book of Collateral Damage. He is an associate professor at New York University.