I Write the Land

I want to write the land,
I want the words
to be the land itself.
But I’m just a statue the Romans carved
and the Arabs forgot.
Colonizers stole my severed hand
and stuck it in a museum.
No matter. I still want to write it –
the land.
My words are everywhere
and silence is my story.

No one will know you tomorrow.
The shelling ended
only to start again within you.
The buildings fell, the horizon burned,
only for flames to rage inside you,
flames that will devour even stone.

The murdered are sunk in sleep,
but sleep will never find you –
awake forever,
awake until they crumble, these massive rocks
said to be the tears of retired gods.

Forgiveness has ended,
and mercy is bleeding outside of time.
No one knows you now,
and no one will know you tomorrow.
You, like the trees,
were planted in place while the shells were falling.

Sorrow pours from the rooms
while I, like a ghost, enter your abandoned homes,
holding my end in my hand,
sleeping and waking with my ruin.
It’s dispiriting to become acquainted
with my own desolation,
to keep step with it to this extent.
They weigh on me – these abandoned houses,
this desertion that fills your homes.
I enter their hollowed hearts, and can barely breathe . . .

Neither Arabs nor Persians nor Byzantines can feel me now.
Didn’t I ever have a history?
And how did I lose them along the way –
poems that were the world unfurling, in a moment?
And how were you lost, all of you?
You took my share of loss
and left abandonment behind,
a planet with no ribs –
you left it for me, you left it
to burden me.

If I said I was leaving
there would still be no one here
but abandonment,
with its hoarse voice that’s swallowing my own. 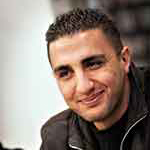 Najwan Darwish (b. 1978, Jerusalem) is one of the foremost contemporary Arab poets. He has published eight books in Arabic, and his work has been translated into more than twenty languages. His most recent book in English translation is Exhausted on the Cross (NYRB Poets, 2021). 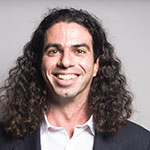 Kareem James Abu-Zeid is an award-winning translator of authors from across the Arab world. His most recent translation is Najwan Darwish’s Exhausted on the Cross, the subject of the featured review in the Spring 2021 issue of WLT.