Seventy years of Palestinian fragmentation since Israel’s creation have taken their toll. The Palestinians of today are split into different communities living different lives from one another. Here, a British Palestinian writer reflects on both the identity forced upon her and on the one she has created.

When Israel was created in 1948, three-quarters of the native Palestinian population fled or were expelled by the soldiers of the new state. The Nakba, as this catastrophe was called, had disastrous effects on the Palestinians, who were condemned to live in UN-administered refugee camps or went into long-term exile in the various countries of the world.

This cataclysmic event was traumatic at every level, from the most obvious to the more subtle. Its consequences for the Palestinians were long-lasting, and sometimes went unrecognized. One of the most malign of these consequences has been the fragmentation of Palestinian identity. Subtle and slow to develop, it was overlooked or poorly understood for years. Yet it was an outcome no less pernicious than the other more dramatic evils of refugeedom and exile.

Growing up in England, where we had taken refuge in 1949, I was never deprived of food, shelter, education, or the basic amenities of everyday life. Nevertheless, though I did not know it then, I was still deprived. From the time when the shock of exile had settled and I had grown used to life in England, I remember the questions of identity beginning to gnaw at me. Who was I really, I would ask myself—Palestinian Arab? English? Muslim? None of the above, or all of the above?

Today, such questions seem banal. With the growth of Muslim minorities in Europe, the search of African Americans for their African roots, the debates on the clash of identity amongst articulate Muslims and others in Britain, there would seem to be nothing new about my predicament. But postwar England was a different country. The large immigrations of South Asian Muslims of the late 1950s and ’60s had scarcely begun; not many Arabs, let alone Palestinians, had arrived in the country either. There were no precedents at the time to guide someone in my position, no shared experiences with other minorities, and the much later conflicts of culture amongst what became known as British Muslims had not yet happened. My upbringing in a country that was alien to my origins in every way demanded adjustments beyond my capabilities as a child.

My upbringing in a country that was alien to my origins in every way demanded adjustments beyond my capabilities as a child.

Our story was common to many Palestinians. We had fled from Jerusalem, our native city, because of Israel’s creation, and landed in postwar London, inadequately prepared for the ordeal to come. Only my father and older sister knew English, and we found ourselves, a small and isolated Palestinian family, suddenly plunged into a cold, unfamiliar land without friends or family. It was hard, but I was young, and within a year I had begun to settle, learned English, and found an accommodation with my peers.

It was then the tussle over identity began. My parents kept an Arab home, had Arab friends, and spoke only in Arabic. At the same time, I was going out every day into a world that was none of those things. For my parents, it was simple: we were Arabs, Muslims, part of a nation that had been expelled from our homeland and barred from returning to it. That was the basis of who we were, and it would never be forgotten. But for me, subject to the pressures of conforming to an English environment, its different culture and norms, it was not so straightforward. Each day I was pulled in two directions—the “Palestine” I lived in at home, stamped with my mother’s Arab cooking, her radio tuned into Arabic stations, and the Arab way of doing things; and the England I walked out of the front door into, its Englishness negating all that.

These contradictions were bewildering and increasingly stressful as I grew older, but I somehow managed to juggle both sides while at home. When I left for university, however, all that changed. The desire to conform to life like any normal student was overpowering, and I gave into it with abandon. I flung off my Arab self, exemplified it seemed to me in a joyless, restrictive home, and embraced the new life with my fellow students. I became as English as it was possible to be, and felt the tensions I’d grown up with ebb away. Like the other girls, I acquired boyfriends—until then, taboo—and finally married one of them. I doubt I fell in love with him as much as with his way of life, and the sense of secure identity it provided.

He was a farmer’s son, and his family home was quintessentially English. Dogs, roaring log fires, country walks, his mother a pillar of the local church. We married, in spite of my parents’ objections, and I was accepted as a “dark-skinned English girl.” The old world of Palestine, Arabism, and Islam gradually vanished. I saw myself living in England for good. It gave me a sense of belonging I had not had before.

Of course, it did not last. The idyll was shattered by the Arab-Israeli war of 1967, when Israel gained a resounding victory over Jordan, Syria, and Egypt. To my dismay, I found my English colleagues and English family all enthusiastically on the side of Israel and therefore against me. It was a rude shock, but it opened my eyes to the artificiality of my English “identity,” and I was cast adrift. I began to realize there was no easy answer for people like me, and it took years to understand that I was not alone, but shared this confusion with fellow Palestinians displaced from the original homeland, and what had been a well-defined society and culture.

Seventy years of Palestinian fragmentation since Israel’s creation have taken their toll. The Palestinians of today are split into different communities living different lives from one another: citizens of Israel, those in the occupied territories, camp-dwelling refugees, and the rest in exile. Nor is that all: some are further subdivided, West Bank Palestinians in towns and villages separated from each other by Israeli checkpoints, and from those in Gaza, and Palestinians in different countries of exile. Each of these groupings has unavoidably acquired the characteristics of their environment and identities that reflect those differing experiences.

I was dismayed by this reality each time I visited Israel-Palestine, and whenever I met Palestinians in Europe or America I could see how they merited labels like “British Palestinians,” “German Palestinians,” “Palestinian Americans,” and so on. The point here is that none of it is accidental. Unlike the typical migrant deciding to seek a better life outside his native land and blurring his identity as a result, in our case the disruption of identity was deliberately forced upon us. The Israeli project aimed from the start to destroy Palestine’s native society, by physical expulsion and, failing that, through breakup of its traditional cohesion to prevent regrouping and resistance.

Has Israel’s pernicious strategy worked? Does today’s broken Palestinian identity signal the end of Palestine’s national cause? The answer lies with Israel. If its strategy had succeeded, then its ongoing campaign of Palestinian oppression, fierce anti-Palestinian counterpropaganda, and continuing suppression of the facts would have ceased long ago. 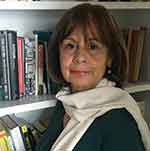 Ghada Karmi is a doctor of medicine, an academic until recently at the University of Exeter, and a political analyst and commentator on the Israeli-Palestinian conflict. She has written several books, including two memoirs, In Search of Fatima and Return.