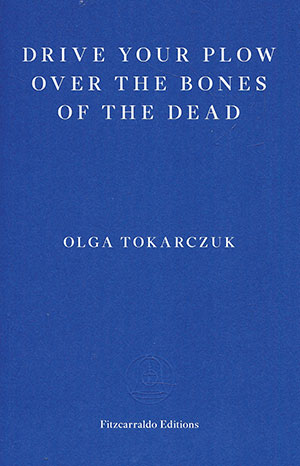 From the opening chapter of Olga Tokarczuk’s Drive Your Plow over the Bones of the Dead, we already know that the aging protagonist, Janina Dusezjko, has a special understanding of the world. Her interior monologue is dotted with odd proper nouns—Animals, Ailments, Night, Being—lending them weight and taking a cue from the Old English of poet William Blake. The novel’s title is lifted from Blake’s The Marriage of Heaven and Hell. “The fox condemns the trap, not himself,” Blake writes, setting the tone of this ecological thriller. Published in the wake of Tokarczuk’s well-deserved win of the Man Booker International Prize, Drive Your Plow is a wunderkammer of human and animal struggle and interdependence.

Janina lives alone in a remote community in the Polish southwest, in a region called Silesia that straddles the Czech border. She is the village eccentric, with a passion for astrology and animal rights, making ends meet by tending to her neighbors’ empty cottages in the dead of winter. Then, a string of deaths transforms the sleepy hamlet into a crime scene. Janina’s stewardship of the woods is challenged by the dogmatic hunting culture of the prominent authorities—including the police chief and the priest—as she becomes embroiled in the bureaucracy of the murder investigations. She transforms into a modern Miss Marple, in the company of equally curious, complex, and unruly sidekicks. Tokarczuk’s professional background in psychoanalysis is most evident in her character development—while many authors write characters, she writes people who retain their capacity to surprise the reader.

Border regions have always occupied a special place for writers, and Tokarczuk is no exception. The cold woods and low winter sun emit an eerie familiarity. Janina makes a game of crossing borders: “It gives me pleasure, because I can remember the time when it wasn’t possible. I love crossing borders.” Her dissatisfaction with her increasingly conservative and religious country is especially pronounced in her romantic notions of life on the other side. “Oh yes,” she thinks, “Venus goes to bed in the Czech Republic.”

The fictional Janina has become a protest figure in Poland; her name appeared on placards at the demonstrations to save the UNESCO-protected Białowieża Forest from logging. Her witty criticisms, which balance that joyful, acquiescent laughter with the other kind, wry and irreverent, are precisely the kind to get under the politicians’ skin. Tokarczuk proves that the novel can absorb philosophy and politics without losing anything of its unique identity, that magical capacity to make a story so compelling that it ascends into the public consciousness.

The detective plot is juxtaposed with Janina’s astrological predictions and metaphysical ruminations on the future of the natural world. The trap this ambitious tale has laid for itself—a knotty copse of ecological and political issues—is deftly circumvented because its characters’ principles develop organically from their personal histories and present conditions. The trappings of translation mean Drive Your Plow has come to the anglophone world a decade later than the original, though no worse for wear in Antonia Lloyd-Jones’s delicate translation.

Once again, Tokarczuk proves herself to be a master of the “thinking novel,” fashioning what is simultaneously a compelling narrative, measured essay, and fierce manifesto. She never hesitates to preach from the literary pulpit, but her lessons have aged gracefully; what could be a trope of eco-feminist dystopia has arrived in such a fitting contemporary context that its implications have never been so far-reaching or so urgent. Drive Your Plow is both a joy and a call to arms.